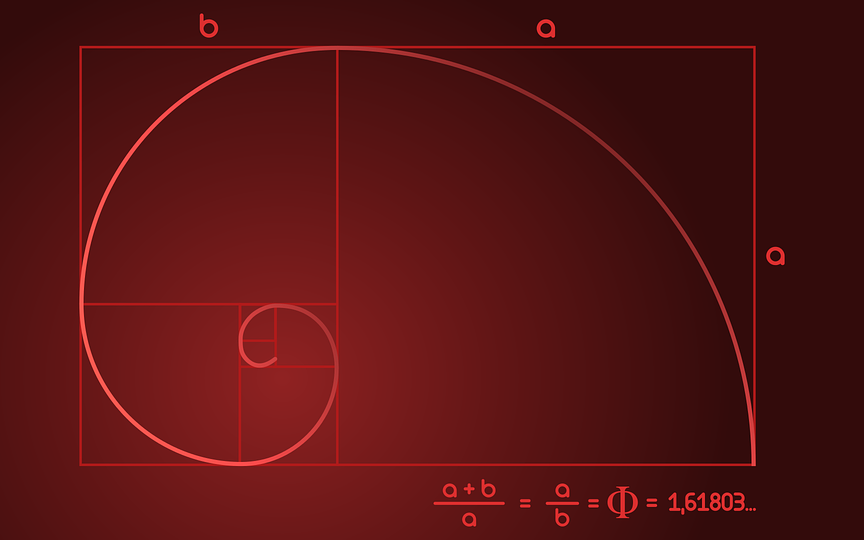 You have probably already heard about this sequence during one of your math classes. It is a famous one and it is called the Fibonacci sequence. This is of course a really simple sequence which everyone can understand. However, it turns out that it has some beautiful properties which we recognize in almost everything.

Back in 1202, the Italian mathematician Leonardo Fibonacci wrote in his book “Liber Abaci” about a simple mathematical sequence. This sequence starts with the numbers 0 and 1 and the next number is just the sum of the two numbers before.

Now let’s take a look what happens if we divide a number in the sequence by the number before. For instance, we get that 8 / 5 =  1.6 and that 13 / 8 = 1.625. As we go further into the sequence and keep doing this, it turns out that the ratio converges to some ratio which approximately equals 1.618. This ratio is often expressed as

and it is equal to

This is actually a problem which the famous mathematician Euclid already solved centuries ago. In this time, he considered the following situation: we take a line and divide it into two pieces such that the ratio of the big piece to the small piece is equal to the ratio of the whole line to the big piece. This is shown in the picture below. 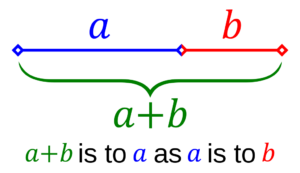 It turns out that the ratio here equals the ratio of

over 1. But when we think a bit harder about this, it actually makes a lot of sense. The equation at which we are looking here is

. But these are also exactly the ratios which should be equal when we are looking at a certain part of a Fibonacci sequence which equals …, b, a, a + b, …. . Now when we rewrite this equation a little bit, we see that:

When we solve this quadratic equation we find that

This is of course an interesting mathematical result but it turns out that these proportions are even more pleasing than we think. This ratio is known since the Renaissance as the golden ratio. One of the biggest admirers of the golden ratio is somebody we all know, Leonardo da Vinci. The paintings of Leonardo were revolutionary in his time and one of the reasons of that was his ability to get everything exactly in proportion. Next to that, he also made the illustrations in a book about the golden ratio which is called “Divina Proportione” (for the interested people: this book can be viewed online at http://issuu.com/s.c.williams-library/docs/de_divina_proportione). Later, other painters also followed this principle and got a lot of success with it. A beautiful example of an application of the golden ratio can be found below in the famous painting “The Creation of Adam” from Michelangelo. In this picture, we see a vertical line crossing through the point where the fingers of Adam and God touch each other. The distance of the vertical line to the right of the painting divided by the distance to the left of this painting is equal to 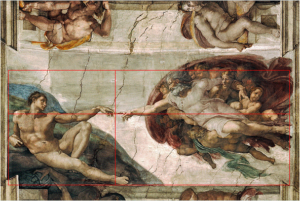 However, we not only recognize the golden ratio  in things created by humans. It turns out that the Fibonacci sequence can also be used to create a perfect spiral. When we keep adding squares of sizes following the Fibonacci sequence, we can draw a spiral which stay within the bounds of those squares. And this is exactly the spiral which we see in several natural phenomena, like the form of a shell which you can see below. 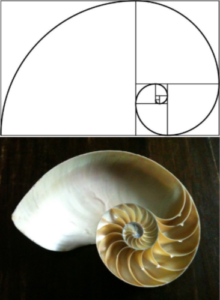 I hope you enjoyed this article and if you have any questions, I will be pleased to answer them. And don’t forget, math is everywhere. Even if you close this article and open a new page on the Google website.