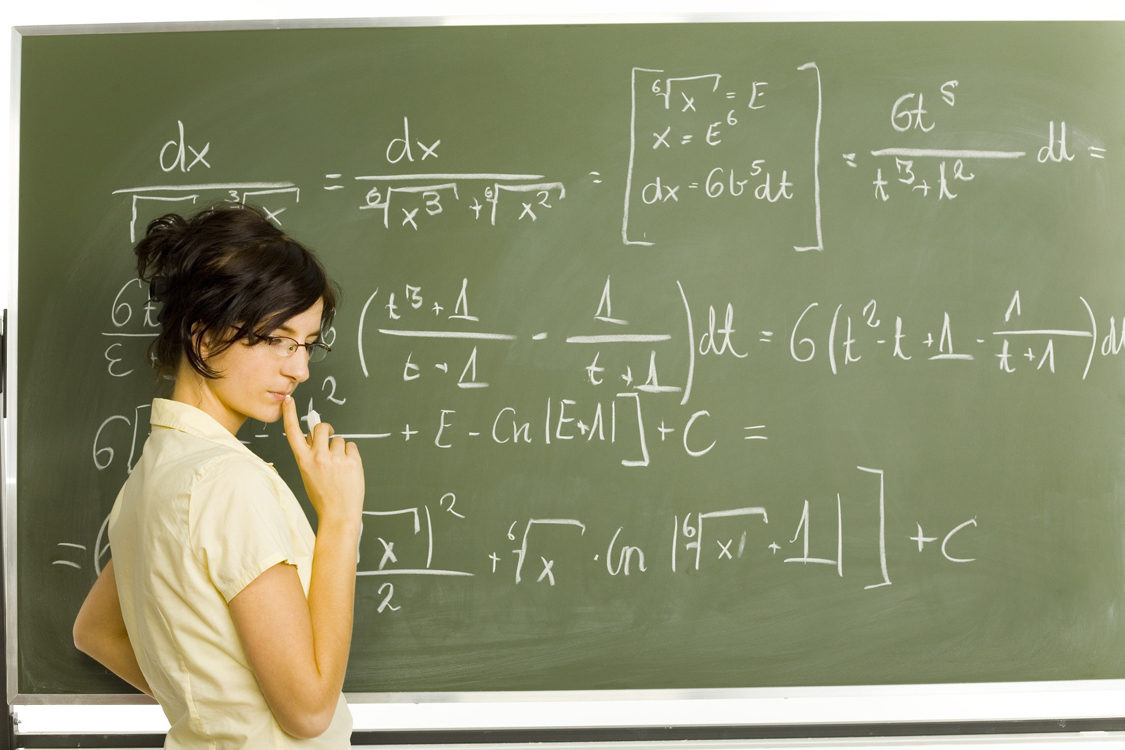 Imagine the world of mathematics without operators or even numbers. A long time ago, there were no such notions as a minus sign or π. It will be clear to everybody that hardly any serious mathematics can exist without a form of written language. Throughout history several civilizations contributed to the system of mathematical notation as we know it now.

The earliest discoveries of something that could be used as a form of mathematical notation is the Ishango bone. There is discussion about the antiquity of the bone, which was found in 1960 by the Belgian geologist Jean de Heinzelin de Braucourt in Belgian Congo. The artefact was first estimated to have originated between 9000 BC and 6500 BC. However, the dating of the site where it was discovered was re-evaluated, and it is now believed to be around 22000 years old. On this bone there are three sets of notches, of which the meaning is subject to discussion. Some believe it is a lunar calendar, while others think prime numbers are involved. However, the very simple explanation that the bone has the function of a counting stick has the most support. It is claimed that the Ishango bone could be the basis of the later in Sumer developed sixty-digit system. Around 3000 BC, this 60-digit system was used firstly to nail down financial transactions, but later on it became the standard for all Sumerian documentation. At about the same time, Upper and Lower Egypt merge into the first Egyptian Dynasty and in the hieroglyphs the same kind of notation as on the Ishango bone turns up: a simple stripe stands for a single unit, but the Egyptians had different symbols for each power of ten. And like the Sumerians, a combination of the several symbols made it possible to write every number. An important difference is that the Sumerians wrote the highest signs at the left as the Egyptians did it the other way around.

Already now, the simple notation provided enough instruments for some serious mathematical problem solving. The majority of our information on the Egyptian knowledge of algebra comes from a document which is known as “Papyrus Rhind”. It is thought to be written at 1650 BC and it should represent the Egyptian knowledge of mathematics from two centuries before. The “Papyrus Rhind” made clear that the Egyptians were able to solve problems, comparable to a linear equation with one unknown variable. Their method was what is now called the ‘Method of false position’: guess, check, guess better, check and repeating this until you get an acceptable answer. The Egyptian algebra did not make use of any mathematical symbols, so the problems had to be solved using rhetoric. An example of this way of practicing mathematics is the following Greek problem: “Demochares has lived a fourth of his life as a boy, a fifth as a youth, a third as a man, and has spent thirteen years in his dotage. How old is he?” Remember that in those days people did not know of any algebraic symbols to solve them. However, a document dated at 300 BC, called ‘Papyrus of Caïro’, indicates that at that time, the Egyptians were able to solve two second degree equations with two unknown variables. It is believed that the Egyptians had troubles advancing their algebra due to their manner of handling with fractures. This did not withhold them from estimating pi at 3.16.

The Babylonian mathematics at that time was more advanced than the Egyptian, since their 60-digit system created a lot of benefits. They had generated procedures to solve quadratic equations and they used mathematical symbols, although not on a large scale. Besides that, it is also known that the Babylonians understood the principle nowadays called Pythagoras’ theorem. The Ancient Greek build on the Babylonian knowledge, but they were unable to make great progress due to their geometrical represented algebra. It is believed this mathematical approach delayed progress for several ages. Later on, the Greek managed to create a system that did not make use of geometry. It was Diophantus who introduced syncopated algebra in 250 AD instead of the rhetorical algebra used until then. The representation of

in syncopated algebra could be “unknown squared 13, unknown 5 equals 18”, which is indeed a great invention. This way of notating will lead easily to find the answer “unknown equals 1”, but it is still not easy to find that

is another answer to this problem. This can well be the reason that Diophantus did not accept the fact that such a problem could have two answers.

Asian mathematics gets a boost from around 1500 BC by introducing written numbers. There are characters for the numbers 1 to 9 as well as for the powers of ten. 0 was represented by emptiness. Nowadays, from several character systems only the Suzhou numerals are still used. Market traders use this form of notation to depict prices. By using counting rods, the Chinese were able to add and subtract and tables helped making multiplications. In India, the start of the Hindu civilization ended the old Indus civilization and under Chinese influences, they created their own system of notation. They were mainly interested in mathematics to use it in astronomy and astrology. A decimal system that made use of positional notation was standard around 600 AD. Zero was considered a number first by Brahmagupta in 625 AD and mathematical operations with zero were discussed. Negative numbers were introduced in order to display debts. Bhaskara apparently introduced the Hindu-Arabic numeral system, which led to the numeral system as we now know it. Bhaskara also found that each positive number has two square roots. The Hindus outstripped the Greek in solving quadratic equations, but they were not able to solve all quadratic equations, since they did not accept roots of negative numbers as an outcome. After the Arabic conquest of India between 700 and 900 AD, little progress was made in the ages of their dominance. The most important changes were the improvement of the numeral system created by Bhaskara and the translation of Greek documents, which led to the conservation of their knowledge. The term ‘algebra’ is also a contribution of the Arabians. It is a degeneration of the title of the book Hisab Al Jabr W’al Muqabala from Mohammed Ibn-Musa Al Khowarizmi, who also introduced the term ‘algorithm’.

From 1500 AD on, Europe became the centre of mathematics again. It took until then for the Europeans to accept 0 as a number and although they used irrational numbers, it was doubted whether they were numbers. The algebra was, as with the Arabians, mainly rhetorical. The publication of some results on solving second and third degree equations in ‘Ars Magna’ by Cardano is for most historians the start of modern mathematics. A real milestone in advancing mathematical notation was taken by Viète. He made a crucial step towards symbolism by using letters for known parameters. Furthermore, the signs for simple mathematical operations got introduced, such as the plus, minus, square root, equality and multiplication symbol. This made it well possible to generalize results, but symbolic algebra only reached full maturity with the publication of ‘La Géométrie’ from Descartes in 1637. The world was now able to combine geometry and algebra, which is nowadays called analytical geometry. At the end of the seventeenth century the deliberate and consistent usage of symbolism, the awareness of ‘powers’ and the possibility of generalisation led to a serious improvement in the knowledge of mathematics.

British mathematicians became the leaders in the study of algebra in the nineteenth century. Peacock first started applying axioms in mathematics, which caused him sometimes being called the ‘Euclid of algebra’. Cayley and Gibbs started to study phenomena such as matrices and vectors and operations with these objects. The field of algebra expanded, since it was no longer restricted to normal number systems, which led to the discovery of non-commutative algebra. Quaternions, introduced in 1843 by Hamilton, were the first example of such algebra, but matrices for example are also non-commutative. It was Galois who finally gave an answer on the three famous construction problems of Antiquity by using the concept of a group. He found that all three problems were unsolvable under the restrictions imposed. Some more mathematical symbols were introduced by Euler (e, i, ∑ and f(x)), Leibniz ( ∫ ), Wallis (∞) and many more, but the essence of mathematical notation did not change much anymore.

Pirahá-Indians are unable to count to one

The importance of language is shown once again by the Brazilian Pirahá-Indians. These skilled hunters and fishermen are not able to count, simply because their language does not have concepts like ‘one’, ‘two’ or ‘three’. “They do have descriptions such as ‘relatively little’ or ‘a little bit more’,” says Dan Everett, professor of linguistics at the University of Manchester. He and his wife are the only two Western people who are able to communicate with the Pirahá-Indians. “As far as I know, Pirahá is the only language without numerals.”

There are more languages with little numerals. In Australia and New-Guinea, there are languages which are only able to make the distinction between ‘one’, ‘two’ and ‘several’. The people speaking these languages are most often also able to count on their fingers. The Pirahá even lack this skill. Therefore, Everett tried for eight months to teach the Pirahá to count to ten in Portuguese. “This happened on request of the Pirahá, since they thought they were misled by merchants often. It turned out to be very hard. “Only the children made modest progress,” says Everett. When the Indians discovered that they were outstripped by their children, they quickly put a stop to the classes.

Everett believes the Pirahá-culture has a great aversion to abstractions. It is only allowed to talk about things one saw, or which can be confirmed by a living person. Numerals do not fit these criteria: it is an abstraction, an agreement to ease counting.