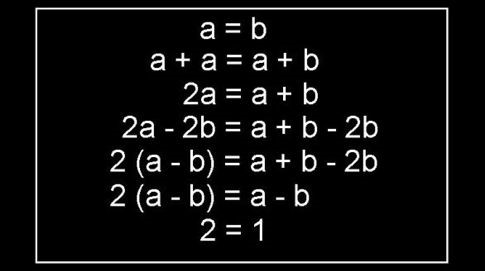 If you only have zero-questions left

Whether you are an econometrician, a mathematician or a hobbyist with some interest in numbers, there is a high probability that you once racked your brain over the question why you cannot divide by zero. Or the equality

, why is that not just equal to zero? The number zero has some interesting properties, and in this article, we will try to find some logical reasoning behind these.

Let us start off with some exponential calculations involving zero. First of all, we find that

. This makes perfect sense as

times. As any number multiplied by zero is zero, this adds up to zero. However, what about

? You could say that

times after each other. Hence,

multiplied just once, which is

zero times, which gives kind of… nothing? However, as is widely known, we have that

. What could be a reasonable explanation for that?

What if we take a look at it from another perspective, and start with

As you can see, the answer is divided by our base number, which is 2, in every step. This is of course clear, as when the exponent decreases by one, you multiply the base one time fewer by itself. From this point of view, we can see why it is clear that

This adds up for all base numbers, as we will find

equal something or nothing?

may be a clarification that you have been waiting for a long time, however it also brings up another, fairly more difficult question: what about

, but does that mean that

Using limits, we can approach

in different ways. Firstly, let us try the limit of

approaches zero. As we saw previously,

. However, we can also take the limit of

can approach zero from both the negative and the positive direction. As zero to the power of any negative number gives a division by zero,

Later in this article, we will elaborate on why exactly a division by zero turns out to be undefined. Approaching zero from the positive direction gives

As limits can bring us to

approaching 1, 0 and undefined, it seems as if the value of

can best be said to be undefined. However, most people stick to the opinion that

. What turns out, is that setting

works out best in most calculations. Take for example the Binomial Theorem, and let us calculate the value of

. The Binomial Theorem is given by

with the Binomial Coefficient

, which is, as we have found previously, equal to 1. The Binomial Theorem in this case gives us:

As will later in this article be explained,

. With this equation, we find that using the Binomial Theorem, we can only say that

. Although limits show us different outcomes, and it can therefore be quite a sensitive subject for some mathematicians, it is in most cases the best, or the least complex choice to say that

The impossibility of dividing by nothing

Another question regarding the number zero is why we in general cannot divide by zero. Why is any division by zero undefined and will a calculator always give an error message? Before we dive into the impossibility of dividing by zero, we will first look at some intuition of why people might argue that a number divided by zero is not undefined but rather approaches infinity.

In the words of the passionate mathematician James Grime,Next to a passionate mathematician, James Grime is also member of the team behind the YouTube channel Numberphile. This quote and some of the examples in this article are from their video Problems with Zero with Matt Parker. “Multiplication is just glorified adding and division is just glorified subtraction.” To illustrate this, take the multiplication

. This is just adding the number 6 for 5 times:

is subtracting 6 of 30 until this is not possible anymore:

would mean that 0 is subtracted from 30 until the number 0 is reached. However, we find

. This continues infinitely many times, which gives reason to believe that 30, or any other number, divided by 0 approaches infinity.

Our next step is to use limits in finding a value for 1/0. We find that

For a lot of mathematicians, infinity is not really a number but more of an idea. Hence, we cannot assign the value ‘infinity’ to a function or equality. For this reason, it is not said that the limit of

approaches 0 from the positive side, but that it approaches infinity. Otherwise, one could say that the limit of

equals infinity, and that the limit of

equals infinity as well. This would imply that 2 equals 1, which is obviously not true.

Hence, the value of

can be argued to approach both infinity and minus infinity. As these are two different answers, we say that

A real life example of why a number divided by zero can lead to complicated situations, is given in the image below. At first glance, this calculation seems quite right, although the outcome is really odd. Taking a closer look, one sees that after the second last equation, both sides are divided by

. As can be found in the first equation,

. Hence, after the second last equation, a division by zero is done on both sides. This gives the strange answer that 2 equals 1, and shows us why division by zero cannot give a proper answer and hence should be seen as undefined. 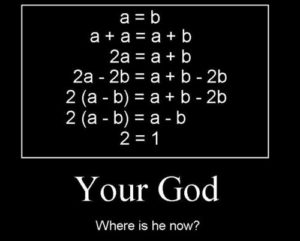 Last but not least, what about the factorial? If one writes 4 factorial, or

Well, let us approach it in the same way we approached

. With this in mind, it is quite logical to say that

. However, we can also explain this more intuitively. As you might know,

ways and 1 subject in just

way. It may sound as a rather philosophical question, but in how many ways could zero objects be sorted? Taking into account vacuous truths, Vacuous truth is a term associated with both mathematics and logic, and regards the truth of statements about an empty set. As the set of objects in this case is empty, it is said to be vacuously true that the set can be ordered in one way. the most logical answer to this question seems to be that the zero objects can be ordered in just one single way, with an empty table as outcome.

Although zero can be quite a tricky number, we have seen that most calculations and equalities around it do make a lot of sense. And this can come in handy, as things generally make more sense and are easier to remember once you have found the intuitively logical reasoning behind it. Luckily, for the most detail- and discussion loving mathematicians, there is always room left for discussions in ambiguous, but highly interesting subjects as calculations with zero.