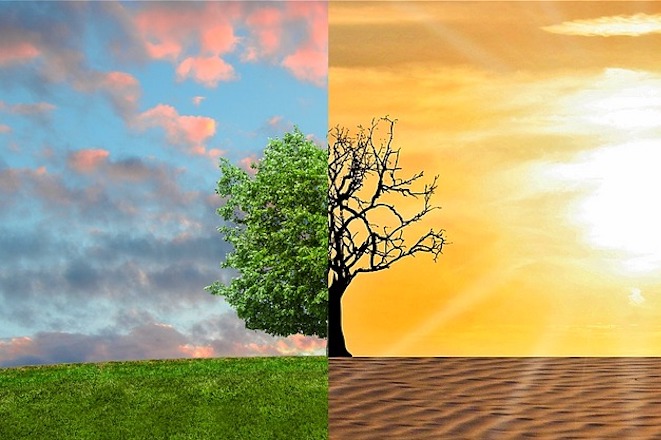 Are central banks the climate rescuers of last resort?

During the 2008 financial crisis, the US housing bubble collapsed since homeowners could not repay their loans, which forced the US government to bail out financial institutions that were “too big to fail” with 21 billion dollars tax money. While we are already in a new financial crisis due to Covid-19, another financial crisis may be looming and the potential permanent damage of this crisis would far eclipse the scale of the 2008 financial crisis. The cause of this financial crisis is climate change, due to which for instance, wildfires, catastrophic floods, droughts, or storms happen more frequently and severely. In other words, climate change can have a devastating impact on society and the economy. Research shows that if temperatures increase to 4 degrees Celsius above preindustrial levels, the global economic losses become 23 trillion dollars per year. Nonetheless, several warning signs and risk exposures are ignored by governments. Green swan events may force central banks to become the climate rescuers of last resort to ensure long-term financial stability.

Green swan events are the “climate” versions of black swan events. Black swan events are for example terrorist attacks, which are unexpected and rare, have an extreme impact and can only be explained after the occurrence of the event. In addition, green swan events are even more serious since they pose an existential threat to humanity, have a higher degree of certainty that they will happen, and are much more complex. Due to the complex, non-linear, chain reaction effects and exceeding thresholds that lead to catastrophic and irreversible impacts, climate change is a very challenging source of financial and price instability because of the multiple features of climate change impacts. Therefore, central banks, regulators, and supervisors, who are responsible for monitoring and maintaining financial stability, should take decisive steps to ensure that the climate-related shocks can be incorporated by the financial system.

A threat to the financial system

Financial stability and climate stability should be examined as interconnected public goods. Two types of climate risk are causing the systematic risk and have a large impact on the economy: physical risk related to climate damages and transition risk related to policy and technological changes necessary to achieve a more green economy. Consequently, financial institutions are not only exposed to losses caused by frequent severe weather occurrences and other environmental changes, but also by stranded assets or providing finances for investments that intensify climate change.

The increase in frequency and severity of climate damages is already noticeable: the average annual economic losses caused by natural disasters from 2016 through 2018 was 150 billion dollars in the US, while this was only 50 billion dollars from 1980 through 2019. Physical risk can lead to destabilization of the financial system since systemically important financial institutions (such as banks and insurance companies) are exposed to this kind of risk. If there is stress at these large, complex, and interconnected financial institutions or even correlated stress across smaller firms who are all exposed to the same risk, this could cause stress throughout the whole financial system. Especially insurance companies are directly exposed to the physical risk of climate change because these events are difficult to predict and there is a large number of dependent events. On the other hand, banks are also directly exposed to this kind of risk caused by the increased level of default and losses. In case of potentially staggering losses due to catastrophic events, insurance companies and banks have to sell illiquid assets for lower prices to obtain enough cash to reduce their exposure. Additionally, banks are also indirectly exposed to physical risk due to the decrease of asset value such as lower house prices or poverty rates in affected communities.

The second way how climate change can cause the financial system to destabilize is by the necessary transition to a greener economy, which causes rapid losses to carbon-intensive assets. This is called transition risk. If the government decides to decarbonize the economy or if new technological developments stimulate the use of low-carbon-emission assets, the price of carbon could increase drastically and this rises the number of stranded assets. Stranded assets are assets that have become obsolete and therefore, must be recorded on the balance sheet as a loss. This could be caused by, for instance, evolving social norms and customer behaviour (e.g. product labeling) or changing resource landscape (e.g. availability of resources). These losses could create stress throughout the financial system and thereby, creating instability and severe knock-on effects to the economy.

There is a need for action

Avoiding or dealing with green swan events requires immediate and ambitious actions to create a structural economic system transformation, such as carbon pricing or disclosure of climate-related risks by the private sector. Two important courses of action by the central banks are necessary to limit the exposure of climate risk, namely central banks should use forward-looking risk assessment models and contribute to coordination to combat climate change (the five Cs). Additionally, coordination of their action with governments, the private sector, the international community, and other important players is crucial since consistent implementation is necessary.

If there is high uncertainty, as with green swan events, traditional backward-looking scenario analyses are not sufficient to predict the future systematic risk posed by climate change. Therefore, a transformation toward the development of forward-looking risk assessment models is needed. Furthermore, climate risk requires more than only scenario analyses since no single scenario or model can capture all macroeconomic, sectoral, and firm-level impacts of climate change.

The action taken by central banks could create moral hazard by governments and other players. Therefore, banks should be more proactive in stimulating broader change to ensure financial stability in the long-term, which is described in the five Cs. This framework includes the promotion of climate risk integration in regulation and financial stability monitoring, such as new modelling approaches, or the integration of sustainability criteria into the portfolios to break the “tragedy of the horizons”. The “tragedy of the horizons” describes the pitfall where financial and political players plan and act on the short-term, while the physical impacts of climate change will be felt over a long-term horizon with massive costs and possible existential threat for future generations.

One thing is clear: climate change is a threat to the financial system. If central banks choose the “wait and see” strategy, catastrophic events will happen that have an irreversible impact on the economy, biodiversity, and humanity. On the other hand, central banks can take several actions to disclose the climate risk, however, they cannot replace governments and other players that ignore climate risk. Coordination and collaboration are crucial aspects in the disclosure of climate risk to achieve long-term financial stability.

2
vorigeWhy does time seem to speed up when we get older?
volgende  Newcomb’s paradox
Partners
Categorieën
Ontdek jouw carrièremogelijkheden!