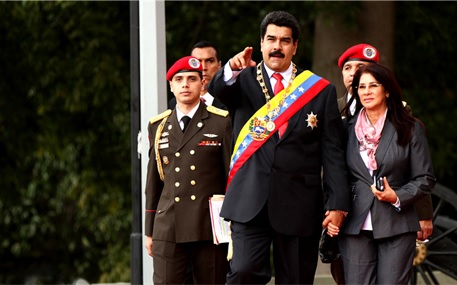 About one year ago, Venezuela’s neighbour Colombia was repetitively claiming headlines concerning the termination of decades of war with guerrilla groups. Consequently, Colombia’s history was scrutinized to put these headlines into context. Currently, Venezuela has taken over these headlines from Colombia. Unfortunately, Venezuela is not on its way up as Colombia was, but this does not mean that the regular news that we read paints the full picture.

Throughout the past months, we have all seen what has come of Venezuela under the cruel reign of Maduro and his government. While there are daily protest marches against Maduro and his governance, there is also substantial support for him and he still remains at his place. Since Maduro’s admission in 2013 though, the quality of life in Venezuela has plummeted and Venezuela scored last on the Law and Order Index Worldwide three out of the past four years (all except 2014). These are obviously not only consequences to his actions as he was only appointed in March 2013. What happened to Venezuela? We will delve deeper into the case of Venezuela as we did with Colombia about a year ago. In this article, the story of Venezuela will be central, from Columbus to Gran Colombia until its current condition.

Venezuela – the Land of Grace

Venezuela was one of the parts of Latin America that was actually discovered by Christopher Columbus, during his third voyage to the Americas in 1498. Since the first European  documentation, Spanish conquistadors described Venezuela, her people and culture to be incredibly beautiful. Columbus, who claimed in a letter to the Spanish reign that he had reached Terrestrial Paradise, commenced this thread by calling the region around the delta of the Orinoco river the Land of Grace. 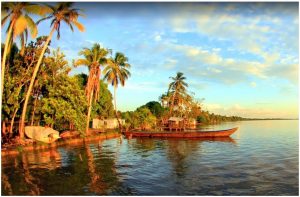 The next year, Alonso de Ojeda led an expedition to the Lake Maracaibo area and the beauty of the stilt houses in the lake reminded him of Venice. Subsequently, De Ojeda named the country Venezuela (little Venice).

From colony to independence

As with many other countries in Latin America, colonization was mostly beneficial for the European colonizers, in this case Spanish conquistadors. The Spanish ruled most of Latin America during the 16th, 17th and 18th century with an iron fist, which gave the indigenous people a choice: Roman Catholicism or execution. Luckily, Venezuela was one of the first countries that managed to declare independence in 1811. True independence and peace, however, were still far away. A series of bloody wars and natural disasters made this a strenuous process that killed many and left Venezuela in ruins. With help from famous independence general Simón Bolivar, they finally managed to rid themselves from the European reign and became part of Gran Colombia. Unfortunately, the bloodshed did not end there, as the remaining Venezuelans felt that the system of Gran Colombia was filled with injustices. Especially concerning tax money that was shipped off to Bogotá, then the capital of Gran Colombia and currently the capital of Colombia, raised many questions. This, once again, brought the Venezuelans to prefer independence over peace.

By 1830, the Venezuelans finally achieved true sovereignty. The past two decades had been absolutely horrible and with 25 to 35 percent of the population killed in these wars for independence, there was almost nothing to fight for anymore. As we all know, there is nothing more destructive for an economy than war. However, the Venezuelans were proud to having attained true independence and designed a new flag. Yellow, blue and red stripes to respectively honour the wealth of their land, celebrate the separation from Spain by water and commemorate the heroic bloodshed of their people. Both the yellow and red stripes are also represented in the middle of the flag, which depicts both the riches and the conflict it took to free it from the Spanish. 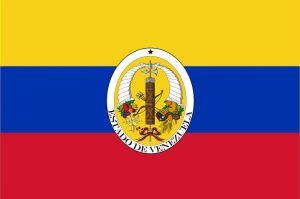 The Venezuelan flag issued in 1830

The 800.000 people that were left by 1830 all learned that achieving true change took some courage and some quarrel and this mentality ruled 19th century Venezuela. Venezuela lost another large share of its population through a series of civil wars and coups. In combination with some international, diplomatic disputes, this led the Venezuelan president, Castro, to default on its debts in 1902. This, obviously, did not improve their situation, as the Europeans issued a naval blockade to Venezuela blocking all trade. The thing that Venezuela needed was cash, but where were they to get money in times of economic despair?

Fortunately, things finally started to look up for Venezuela: enormous oil reservoirs were discovered in the once praised (by Ojeda) Lake Maracaibo. These reserves were so big that to this day, Venezuela has the largest proven oil reserves in the world; almost as much as Saudi Arabia and the Emirates combined! One would say, finally a moment to pay off debt and structurally form a sustainable country, right?

At least at the beginning, there was nothing that could go wrong. Debts were paid off swiftly, the starving Venezuelans were taken care of and the country, led by Gómez, finally found some enduring peace. A country, mainly dependent of its agricultural exports, got filthy rich out of nowhere and went from South-America’s poorest to the richest country (highest GDP) in the continent in 1935. This growth persevered until the 70s, with extraordinary increases during the 60s and 70s. These years were pivotal for Venezuela and here its future was determined, not by the infamous “dictator Maduro”. Why, you ask?

Obviously, such a new pile of cash would initiate some kind of corruption anywhere as most things and people have a price. However, when there is so much money to spend, people almost cannot notice how much disappears. In an instant, farmers went from surviving one day to the next to a life with few worries. Therefore, it makes sense that there was few criticism towards the government. This gave Gómez, the president until 1935, a lot of freedom to enforce his authority and to enrich himself and his friends. A new struggle emerged, one of control over the oil reserves. Dictators, one after the other, remained in power until 1945, until yet another coup d’état, which finally brought forth the first truly democratically chosen president: the famous, respected Latin-American modernismo writer Rómulo Gallegos won the elections with over seventy percent of the votes.

Gallegos, who was already renowned for his anti-dictatorship works of the 1920s, such as Doña Bárbara, was going to completely reform the country to a functioning democracy with a stable economy. He raised taxes on the oil companies as to generate more financial freedom for the Venezuelan government. Cutting into powerful people’s earnings, however, is never a popular move and the pro-coup Venezuelans overthrew him after nine months in office. Yet another golpe and perhaps the knockout punch against a sustainable economy in Venezuela. The country was once again ruled by a military dictatorship until finally democracy thrived by the end of the 50s.

The oil crisis in 1973 had made all the difference for Venezuela. Where they were already the richest country in Latin-America, they now appeared to have unlimited cash. The president, Pérez, nationalized the Venezuelan oil industry as to make more money from it. As recent history has shown, however, Pérez also needed to keep the whole nation satisfied as to assure his position as president and prevent uprisings. Therefore, he immensely augmented public spending and stepped up oil exports to fund these plans. Consequently, a phenomenon that originated in Groningen called the Dutch Disease – which is when all export sectors of a country diminish as the high oil/gas exports extremely appreciate the country’s currency until the other sectors are no longer internationally competitive – forced out most farming export businesses. From here on, it was just waiting until the oil price would fall, Venezuela would run out of cash and Pérez would realize that he did not spend a penny investing in a sustainable economy.

This happened in the 80s, when in a matter of years, the oil prices lost about sixty percent of their international market value. The country was left with no alternative export sectors, outrageous public spending and barely any investments in a sustainable economy. The 80s and 90s were strikingly similar to the beginning of the century as there were more political crises and coups. This time, however, it was driven by economic crises.

Around the turn of the millennium, when oil prices picked up again, the populist and perhaps communist, Chávez was elected president. With new funds coming in from oil exports, he initiated many social support programs and subsequently he got wide and strong support from the poorer Venezuelans. Unfortunately, this was, yet again, not as much a stable investment to build up a sustainable economy as it was pure benefits for the less fortunate. The focus of these programs resided in housing subsidies and discounted food, which only satisfies the masses, but does not actually get people out of poverty. Different president, same mistake.

And then came Nicolás Maduro

Through the fourteen years of Chávez’s presidency, our ignominious friend Maduro rose through the ranks and he rose far. As a bus driver, Maduro started out as one of Caracas’ common carriers; however, through working his way up in the union, he finally got promoted to vice-president. Even though we can all agree his career went through an impressive development, one could quite easily question his credentials concerning managing a country. When Chávez died in 2013, Maduro won the elections with just over fifty percent of the votes while the centralized opposition ended with 49.1 percent. Maduro’s government, although supported by many (less fortunate) Venezuelans, was internationally seen as fraudulent and reputed as a dictatorship.

This is the situation in which Maduro started his presidency: an unqualified, inexperienced and uneducated man gains legally challenged reign over a divided, indebted country with no sustainable backbone of the economy and outrageous public and import costs. While condemning his actions, one can still wonder how this situation could have played out any differently. Perhaps we can agree on the following: whoever would be Chávez’s successor, there was going to be another crisis in Venezuela with the oil price plunge of 2014. The degree of government transparency, political freedom and safety in Venezuela, however, could perhaps have been superior to what we are reading in the news today.