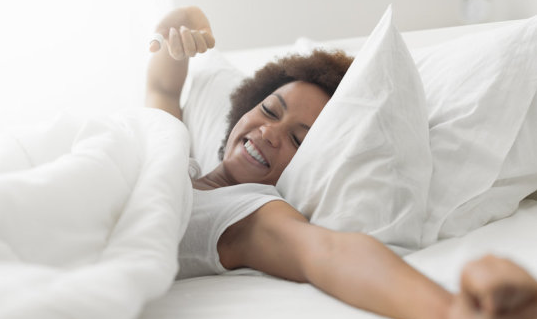 The mathematics behind waking up happy

As an infant you were never tired when you had to sleep, to wake up a teenager you need a cannon shot and in our “golden” years napping seems to come as easily as breathing. Sleep and its underlying processes hold many mysteries. Why does the brain switch between different stages of sleep? Why do you still feel groggy after a night of sleep sometimes? Despite a lot of available data and research, researchers still find it hard to answer the basic question about one of our most essential bodily function. In order to understand the sleep cycle better, the science has combined biology and mathematics.

Sleep is divided into two types: the rapid eye movement (REM) sleep and the non-rapid eye movement (non-REM) sleep. The non-REM sleep is the first phase and after some time it is transferred into stages 3 and 4, which are called deep sleep. Now the homeostatic process occurs: the heart rate and body temperature fall and the brain uses less energy. During this process our bodies repair themselves. The REM sleep represents a shorter period of the total sleep time and in this phase dreams occur. This type of sleep is associated with fast and desynchronized brain waves, eye movements and interruption of homeostasis. Hence, during a full cycle, lasting on average 1,5 hours, we fall into deeper stages of sleep, reach the bottom of the cycle and then go back up to the nearly-awake stage REM sleep. This is also shown in the figure below. 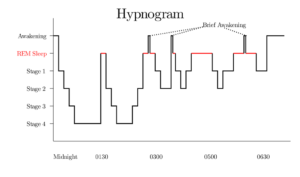 During a good night’s sleep someone switches 4-6 times from non-REM sleep to REM sleep and the proportion of REM sleep increases in the two cycles just before natural awakening.

The function of sleep

To be able to look at sleep in a simplified mathematical way, we have to find a function that describes the sleep stage. Let S denote the sleep stage and t denote the hours of sleep. Mathematically, we can say that your sleep stage S is a function of t, thus we can write S = f(t). Since the sleep cycle lasts on average 1,5 hours and then begins again, we know that f(t) is a periodic function with period T = 1,5 hours. A periodic function is a function whose values repeat after an interval of time T, which is called the period. We assume that t = 0 is the moment you fall asleep. Let S = 0 be assigned to the nearly-awake sleep stage and assign each stage of the non-REM sleep to the next negative whole number. For example, sleep stage N1 is assigned to stage S = -1. Now we obtain the the trigonometric function which has the corresponding diagram in Figure 2(b) 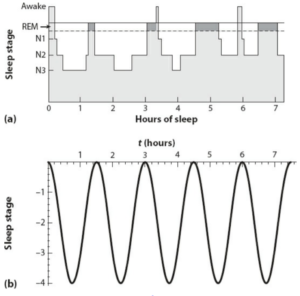 Figure 2: (a) A typical sleep cycle (b) Our trigonometric function f(t)

The optimal hours of sleep

Since we have on average 5 sleep cycles during a good night’s sleep, it is obvious that the optimal hours of sleep is exactly 7,5 hours. Then you will not wake up in stage 3 or 4, which will make you feel groggy. But what happens if you sleep some minutes less or more? We want to know how close to a multiple of 1,5 hours you need to wake up to make sure that you won’t wake up during your deep sleep.

To feel relatively awake you have to be in stage S = 0 or S = -1 when you wake up, because in these stages you are in a relatively light sleep.  Mathematically, this can be written as

The past 10 years Janet Best, who is a mathematician at Ohio State University and whose research is funded by the National Science Foundation (NSF), has been studying sleep-wake cycles using mathematical models. In order to do this she reformulates biological questions in terms of mathematics. Using differential equations, Janet describes the properties of neurons involved in the sleep cycle and shows the way in which interact and influence each other.

The difficult part is that sleep is both regular and random. It’s regular because we go to sleep approximately at the same time of day. Sleep is random in that some people have no pattern in their sleep cycles and in the variability of when we might wake up during the night. Janet investigate how neutral structures in the brain affect the regularness and randomness of sleep. She wants to understand the dynamics of the brain and how systems within an organism interact and function.
Another difficulty is that there are so many variables, such as 200 million neurons with all their chemistry, hormones etcetera. There are multiple ways how an particular action can happen, so building a good model that separates all the information.

Investigations about the sleep cycle help understanding the underlying sleep/wake mechanism. In this way, researchers can develop treatments and remedies for medical condition-induced sleep disorders or strategies to reduce a jet lag more quickly. To understand the data of sleep studies, we first have understand the underlying neutral structures of the brain. The mathematical analysis gives new insights in the sleep cycle.