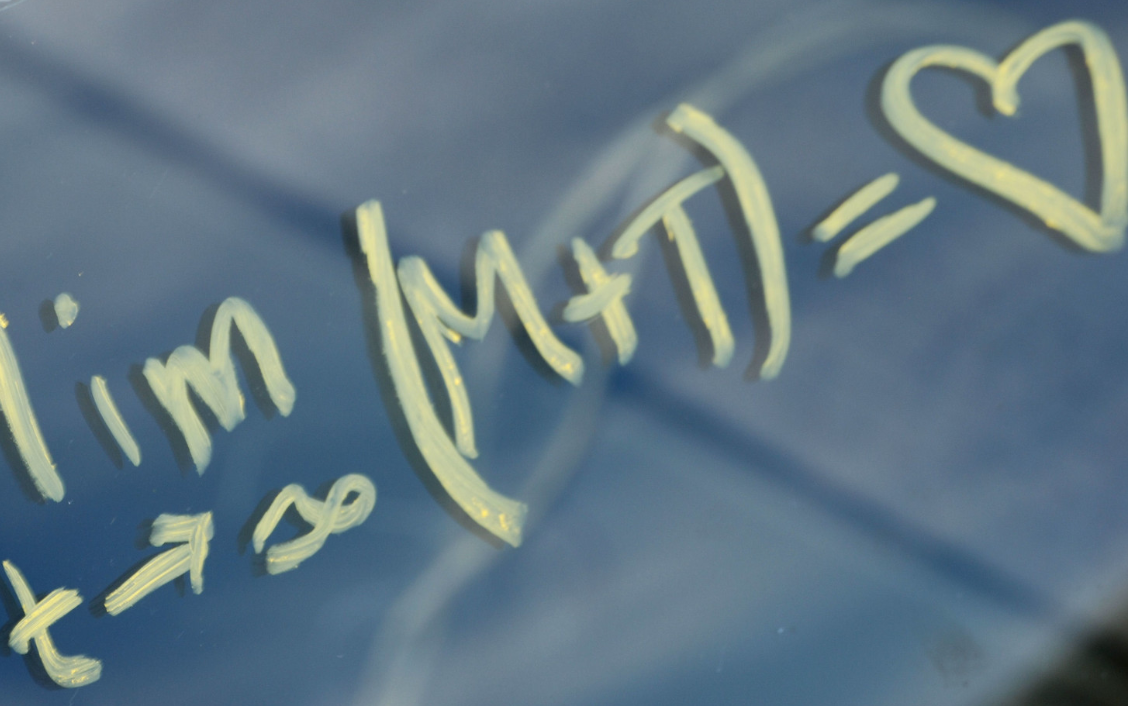 The math behind your love life

Normally, when we apply mathematics in the real world it is to find patterns, to find the underlying dynamics of something which is complex at first sight. We use it for example to predict earthquakes, to compute the premium of an insurance or to find the optimal strategy how to run our business. These are things which follow patterns, they do not happen out of the blue and there is some underlying logic. However, not everything can easily be described by math. On that side, I would put love. Love is mysterious and a lot of times we don’t really see the logical patterns. But, is this really true?

The big difference between love and a lot of other things is that love is based on emotions. And, as many psychologists will agree, emotions are not based on rationality. They depend on several things which we usually are not even aware of. If you are interested in this subject, I would really advise you to read the book “Thinking, Fast and Slow” by Daniel Kahneman.

So, let’s say that we are looking at a married couple and we are curious if their marriage will persist. At the moment, it is a sad fact of life that the divorce to marriage ratio is almost 50% in the United States

. This does not seem like something which we can describe using mathematics. It is already really hard to know what we should measure and what we should quantify.

This did not stop Dr. John Gottman in his research on divorce. He and his team observed hundreds of couples having a conversation and in the meantime Gottman and his team were measuring everything. They measured what was said, the heart rate, facial expressions and many other things. And what turned out to be? They could predict whether the couple would divorce or not with 90% accuracy! The most important predictor turned out to be how positive and negative a couple can be to one another.

To really understand and describe how these spirals of negativity behave, Gottman teamed up with a mathematician by the name of James Murray. Together, they came up with the following set of equations:

When I see these equations I do not immediately think about a married couple but I would rather get flashbacks to a course about difference equations. Actually, these equations describe a very simple set of rules for predicting how negative or positive the husband and wife will be in the next conversation. The meaning of the variables can be found in the picture below: 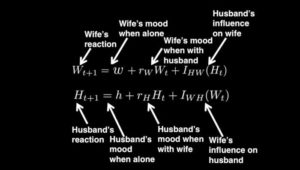 The most interesting part of these equations is the influence term, the

. These functions show the impact on the mood of the other person given the positivity/negativity which the other person just showed. Gottman and Murray found that the version which is shown in the picture below fitted well with real life outcomes. 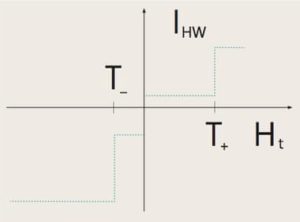 On the y-axis we see the influence that a husband has on its wife and on the x-axis is the positivity/negativity of the husband in the past conversation. If the husband does something which is a little bit positive, like agreeing with his wife on the last point, his wife is more likely to be positive in the next conversation. This happens until some point

. After this point, his wife will respond very negatively. And exactly this negativity threshold

is really useful to understand the spirals of negativity.

You would maybe expect that the best relationships have a high

, these relationships are focused on compromise and only bringing an issue up if it is a big deal. Interestingly, the outcome of the study is the opposite. The best relationships have a really low

. These couples allow each other to complain and work together to fix the tiny issues. In this case, little things do not end up being blown completely out of proportion.

Love is probably the subject that is the furthest away from math. However, mathematics still offers us new insights in the patterns of relationships. So, if you are having some struggles with your relationship, perhaps it would be a good choice to pick up your math book a bit more often.