In the movie ‘The Butterfly Effect’ a college student, Evan Treborn, finds a way to ‘travel back in time’. He does this by inhabiting his former self, that is, his adult mind inhabits his younger body. In this way, he can change the present by changing his past behaviours. Unfortunately, this has unintended consequences for him and his friends. It is not a coincidence that this movie is called ‘The Butterfly Effect’. The movie is named after the mathematical idea that is also called the Butterfly Effect, which is based on the phenomenon that the single flap of a butterfly’s wings in Brazil could set off a tornado in Texas. Whilst it seems that this is quite ridiculous, the concept is not meant to be taken literally. The metaphor is simply meant to demonstrate that a little insignificant event can lead to significant results over time.

The idea was first thought of in the early 1960s, by an MIT meteorology professor Edward Lorenz. Given that weather is determined by a set of measurable factors, such as temperature, pressure and wind velocity, it was not an illogical idea to try to predict the weather conditions into the future. With this in mind, Lorenz constructed a simple set of equations for air convention and programmed that into his computer.
He put in an initial set of data, switched on the computer and waited for the printout. After this, he decides to re-enter the data and run the program longer. Lorenz was astonished to find out that the program yielded a radically different forecast. He soon discovered why, namely that the initial values of the second round had been rounded off by a seemingly insignificant amount. While typing in the new conditions, he had entered 0.506 rather than 0.506127, which is a difference of less than 0.1%. Due to the small differences in initial conditions, the systems will keep the same behavior for a while, but over time, they will diverge, as one can see in the graph below. After enough time their behavior will appear completely unrelated to one another. Somehow, even for a straightforward, deterministic set of equations, a minute change in initial conditions yielded radically different behaviour. 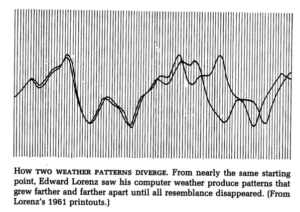 Lorenz not only discovered this, he also identified its key mechanism. With this, chaos theory was born. This is usually defined as “The branch of mathematics focusing on the behavior of dynamical systems that are highly sensitive to initial conditions.’’ Hence, that small variances in initial conditions can have profound and widely divergent effects on a system. With this new insight in mathematics, Lorenz had come to question some fundamental laws of physics. In particular, he questioned the laws proposed by Sir Isaac Newton about the mechanical and predictable nature of the Universe. Newton stated that we could calculate anything. For the first time, we were able to calculate the movements of heavily interstellar bodies like the stars. Unfortunately, due to Lorenz’s work, this seemed not to be true anymore. Not only Newton, but also Pierre-Simon Laplace was challenged. This man had argued that unpredictability has no place in the Universe, asserting that if we knew all the physical laws of nature, then ‘nothing would be uncertain and the future, as the past, would be present to our eyes.’He had even suggested that someday weather forecasts would be perfectly accurate, with nothing left to chance. Unfortunately, if it weren’t for quantum phenomena like Heisenberg’s uncertainty principle, this wouldn’t be the case. Hence, this argument was also made invalid by the Chaos Theory.

In 1963, Lorenz published his seminal paper ‘Deterministic nonperiodic flow’ in the Journal of the Atmospheric Sciences. Hereby he introduced the concept of what became known as the Lorenz attractor. This arises from a set of three equations that show how a dynamical system can produce complex, non-repeating patterns. It describes the conditions that make the system behave chaotically. Initially, these equations were used to model convection in the upper atmosphere. These three equations are differential equations, which are not your usual algebraic functions. These functions are based on other variables, where the answer is not one individual number, but a function itself. Lorenz derived and drastically simplified the equation of a man named Salzman, obtaining the following differential equations:

represents the intensity of the convection,

represents the temperature difference between the ascending and descending currents and

is proportional to the distortion of the vertical temperature profile from linearity, a positive value indicating that the strongest gradients occur near the boundaries. Besides that, the constant

is the Prandtl number. After some physical considerations, Lorenz chose to use the numerical values

. Since these values remain traditional today, it was a good choice.
This may all seem a bit theoretical, but we can see what happens when we graph these formulas. At first, it starts spinning in a circle, but when we go away from the birth, the particle starts moving in random areas, which are almost unpredictable. But in reality, it is not that unpredictable at all. The function namely has a certain outline, maximum and minimum. Hence, it does not go past a certain point.
If we look at the following graph, where 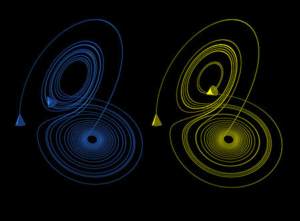 This shows two segments of the three-dimensional evolution of two trajectories for the same period of time in the Lorenz attractor. These are starting at two initial points with a difference of only

in the x-coordinate. Initially, the two trajectories seem to move in the same way, but, as can be seen in the following figure, for

the difference is starting to get relatively large. The final position of the cones indicates that the two trajectories are no longer coincident at 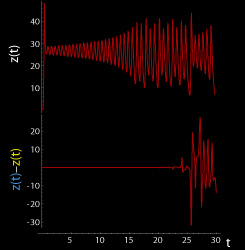 So, we have seen that the foundings of Lorenz have changed the understanding of mathematics quite drastically, and it is applicable in the physical world in may scenarios. Take for example weather forecasting. What happens nowadays is that forecasters still use Lorenz’s equation. They do this by calculating the equations a couple of times with different initial conditions. After this, they take the average of those initial conditions, which simply is how our weather is forecasted today.
Another, quite surprising example is the success of marital status. This was shown in the work of John Gottman and his team. Here, they look at about 700 couples over the intensity of a decade. They measured how many times they raised eyebrows at each other, how many times they hugged, how many times they kissed and made their own set of difference equations. In this study, Gottman found out that they could predict how long these couples would last in 94% of the time. You can read more about this in Stan’s article posted a few weeks ago.

As we can see, a meteorologist named Edward Lorenz had an epiphany, and a whole new field of mathematics was born: Chaos Theory. For his work, he was awarded the Kyoto Prize in 1991. Here, the judging committee stated that his discovery of ‘deterministic chaos’ brought about ‘one of the most dramatic changes in mankind’s view of nature since Sir Isaac Newton’. With no Nobel prize for meteorology or mathematics, this was a high praise. Besides that, he won the $50,000 Crafoord Prize in 1983, which recognizes leaders in the scientific field not eligible for a Nobel prize. And thus, to give a last summary of the Chaos Theory by Lorenz himself: “Chaos: When the present determines the future, but, the approximate present does not approximately determine the future.”