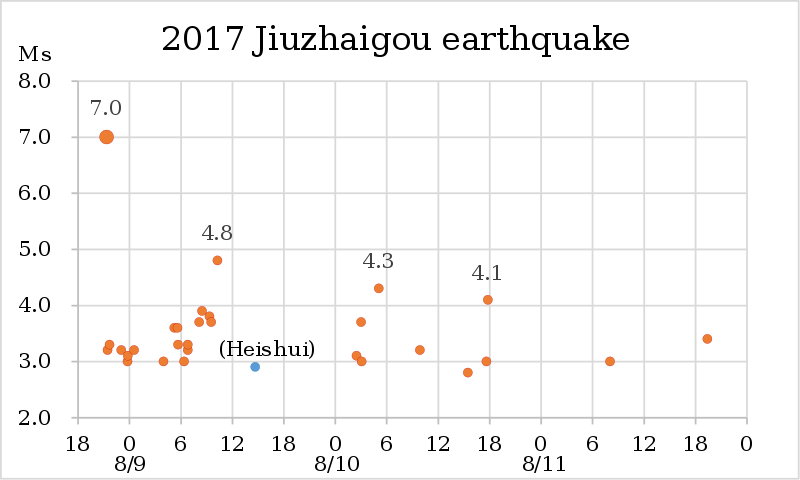 Tech & Data in Humanitarian Aid: Econometricians to the Rescue?

Welcome to the era of digital humanitarianism! The age in which you can save lives from behind your computer in a basement and coordinate humanitarian missions while riding the Thalys from Amsterdam to Paris. Since the Haiti earthquake of 2010, data collection and processing has skyrocketed in humanitarian aid and there seems to be no sign of it slowing down any time soon. Multi-day events such as Techfugees The Techfugees Global Summit was a two day, very well funded conference on how to implement technology, data and other innovation in humanitarian aid. It was held in Paris last year and it brought together nonprofits, startups, governments and corporations to share best practices, to inspire others and to connect to new potential partners.  and millions of euros in subventions promote technological advancements. However, danger lies ahead as the overflow of data in emergency response missions can be as paralyzing as the lack of data. What is the added value of data and technology? And what are the challenges?

Let us start at the beginning, the 2010 Haiti earthquake of catastrophic magnitude 7.0 with over fifty aftershocks over magnitude 4.5, which left more than 100.000 deaths and 250.000 destroyed buildings. As a comparison, the strongest earthquake we have had in Groningen as a result of natural gas extraction was of magnitude 3.6. In both the response and the recovery phase, two of the four elements of disaster management (next to preparedness and mitigation), Haiti was the first time an open source platform was used to produce a crisis map which was fed by volunteer-generated information. People on site could text about and upload needs, crises and other updates all over Haiti and their information would be shared immediately. Over fifty thousand incident reports [1] were generated and the US Federal Emergency Management Authority (FEMA) called the crisis map “the most comprehensive and up-to-date source of information on Haiti for the humanitarian community.”[2]

“I’m buried under the rubble, but I’m still alive.”

The developers? A group of Kenyans who started to use their platform, Ushahidi, to report and map violence after the much disputed 2007 elections in Kenya. The map was widely used by search and rescue teams, such as the Red Cross, FEMA and the World Food Program, to rescue survivors and it substantially reduced (although the reduction is hardly quantifiable) the already immense death toll in Haiti. By harvesting the power of crowdsourcing, Ushahidi has made an enormous impact and their work has inspired the humanitarian world to incorporate contemporary technology and data opportunities into their everyday activities. 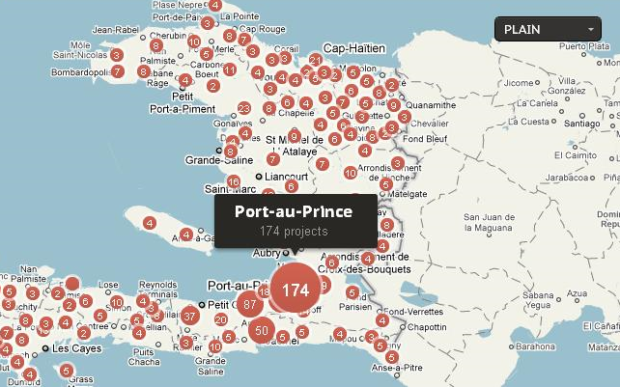 The Ushahidi crisis map one year after the first quake

Crowdsourcing, how did it work in Haiti? It was only two hours after the first quake that Ushahidi put in place their crisis map: text messages with emergencies could be sent to 4636 by anyone with a phone and messages raced in immediately. Clearly, Ushahidi was depending on people on the ground to provide them with updates and it was mostly the locals who managed to get good descriptions in. However, the Haitians sent most of their messages in the local Creole language. The solution? Also crowdsourcing the translation services: Ushahidi worked with over ten thousand Haitian-American volunteers translating every message within ten minutes! The American Marine Corps took an opportunity to thank Ushahidi for its services, saying that their work “is saving lives every day” as many text messages coming in were essentially: “I’m buried under rubble, but I’m still alive.” Crowdsourcing has since become the new standard in similar disasters and Ushahidi has been used on several humanitarian and environmental disasters, such as on violence in the Syrian war and on the consequences of the 2010 BP oil spill on the Gulf Coast.

Due to advancing technology and data, the humanitarian community is now experiencing changes in the composition of its workforce and its traditional power dynamics.[3] Firstly, since there are more and more data oriented employees necessary for humanitarian agencies (such as software developers), there is on one side an outflow of other employees and on the flip side an inflow of these more technical employees and interpreter colleagues who function as the connection between technical output and the less quantitative humanitarians who have to work with it. The methodological annex of the Internal Displacement Monitoring Centre (IDMC)[4], who monitor flows of refugees from conflict and disaster, for instance counts 22 pages that are fine for interpretation by an econometrician, but could be strenuous to work with for some humanitarians. The British Red Cross even developed a model to predict refugee flows, which is clearly monitored by people with a technical background. Simultaneously, with advancing technology and, most of all, fast and functioning internet, the power dynamics in humanitarian aid are also shifting. Some humanitarians might hate me for saying this, but before good technology, there was little demand for transparency of the large and dominant NGOs. Without the internet: how would you communicate this transparency? And how would a critic validate it? Therefore these organizations were even larger, more hierarchical and more bureaucratic; basically operational mysteries. Nowadays, some judge large NGOs for paying substantial salaries to their directors, but this is happening because now people are able to access this information. As a result, smaller players enter the ‘market’ as they can operate more efficiently, transparency and sharing have become key and less control is exerted by dominant organizations and governments. These changes have made the humanitarian world more inclusive and, according to the 2017 Global NGO Online Technology Report, another well funded tech oriented initiative partly directed towards humanitarianism, eighty percent of global citizens agree that NGOs make it easier to be involved in positive social change.[5] Currently, there are an estimated ten million NGOs worldwide, which gives people a shorter link to making an impact. Up to this point, it appears as if technology and data only benefit the humanitarian world.

The uprising implementation of technology and data science, however, also generates many new challenges in (among others) the collection and manipulation of data. When thousands and thousands of Syrian refugees crossed the Aegean Sea onto the islands of Lesbos, Chios, Leros, et cetera, they were immediately identified as to ensure their origin, safety and, very importantly, identity. Almost none were in possession of a passport and many did not know their birthday. In combination with the large work pressure for the officials, who can also be partly blamed for this, the majority of refugees are now documented to be born on the first of January. Incorporating the inaccuracies in documenting year of birth as well, which occurred plenty, we now face cases where we do not know whether a refugee is a minor or not. More crucial is the knowledge of this inaccurate data collection process, because it serves as an argument to doubt and manipulate it. Unaccompanied minors are treated as adults (and vice versa) at the borders of Europe, because birthdays are put into question. The importance of this? Minors are eligible for family reunification and adults are not.

For the past two years, I have been running a small NGO, Human Aid in Greece, providing first necessity items and services to refugees, mostly on the borders of Europe. Having spent around 150 days in different refugee camps throughout Europe, I hope to use my experience to provide some anecdotes about the challenges of technology and data in humanitarianism, as opposed to only providing numbers. Text concerning refugees which are not provided by a source are therefore anecdotes from my own experiences.

Also the subject of privacy, the implementation of new techniques in emergencies and the dependence on technology form challenges during the digital evolution in humanitarianism. The United Nations High Commissioner for Refugees (UNHCR) even identifies data privacy as one of the ten data science challenges facing humanitarian organizations.[6] Privacy has of course been a widely covered news item with the recent Facebook scandals and this also applies to humanitarian disaster. Take for instance the above mentioned inaccuracies with which data is gathered about refugees on Europe’s borders. This information is matched with a fingerprint and consequently a large amount of data is collected and assigned to refugees, while it is recognized that there is a large need for policies, protocols and practices to work with such data.[7] I refer you to Chan, Bateman and Olafsson (2016) for a more detailed example on dealing with data privacy during the Ebola outbreak in West Africa. Another data science challenge identified by the UNHCR concerns the implementation of new techniques in emergencies[6], because usually in these situations, mistakes are crucial. Take for instance the implementation of Ushahidi after the 2007 Kenyan elections: mistakes in the documentation of incidents could leave many crimes unpunished, while there are also parties (the offenders) that would benefit from the crashing of the platform. There are countless moments to which this could be applied, such as after the failed Turkish coup or the persecution of the Rohingya in Myanmar. Lastly, starting in 2010 in Haiti, the possession of technology has become indispensable for people affected by humanitarian disaster. Clearly, for instance, the possibility to communicate your needs via a mobile phone in a crisis area that was left by an earthquake is a great result of technology and only brings advantages. However, we have entered a stage where that same mobile phone has become a necessity item: asylum interviews for refugees in Greece were planned by phone, which means having a phone is essential for the asylum procedure. Clearly, though, in above situations, phones were sometimes stolen, regularly broken and often very hard to charge. There are NGOs who, as their core job, provide generators and phone chargers to refugees. 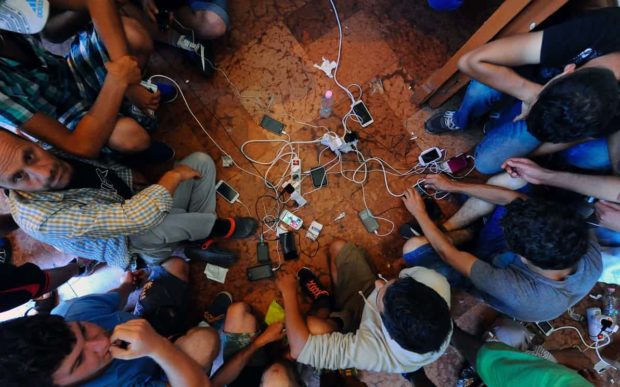 Refugees sitting around a power source to charge their phones. Photo by Attila Kisbenedek/AFP/Getty.

The advancement of technology and the ease at which we can currently collect data is remarkable and clearly beneficial to many aspects of society. In humanitarian aid, it has made an enormous impact and saved many lives, while pushing organizations to professionalize and become more transparent. Simultaneously, these developments are changing the power dynamics and uncovering new challenges in humanitarian aid. These challenges include, but are not limited to, data manipulation, privacy and a dependence on technology. One can only hope that, in the long run, the challenges will be dealt with while we can still enjoy the advantages of innovation. What is necessary to realize this in the future? Some econometricians and data scientists with ethics to come and work in the humanitarian sector. 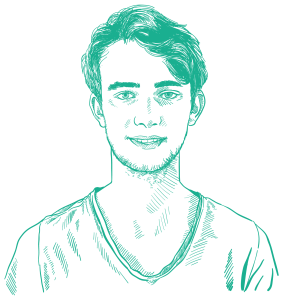