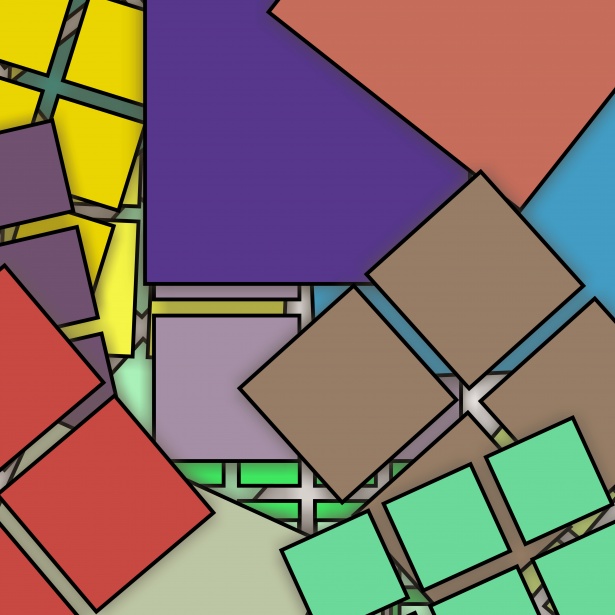 – They extended the horizontal lines of the squared rectangles.

– They connected these extended horizontal lines by an arrow if the squares were touching.

– They added the lengths of the squares to the corresponding arrows.

An example of the converting process is given below: 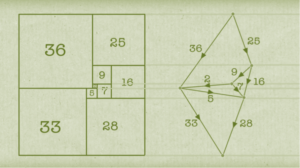 The four students immediately recognized something all these squared rectangle networks had in common; they all had the characteristics of an electrical network! Fortunately, there was numerous amounts of research done in the past about electrical networks. Therefore, the students could easily borrow the theorems of electrical networks and apply these theorems to solve the squaring the square problem. One of these main theorems is called Kirchhof’s law. Kirchhof’s law consists of  two compelling parts. The first part is that the total flow into a point has to equal the total flow out of that same point in an electrical network. If we look at the circuit above for example, we see that the left middle point has a total inflow of 36 + 2 = 38 and a total outflow of 5 + 33 = 38. The second interesting part of Kirchhof’s law is that if an electrical network consists of one or more smaller circuits, each particular smaller circuit’s flow has to add up to 0. Note that the above example consists of four smaller circuits. If we look at the upper one, the one consisting of four points, we find 36 – 2 – 9 – 25 = 0. This theorem also works for the other three smaller circuits. Using these electrical network theorems, the four students found squaring squares consisting of 55, 38 and 26 squares. They were pleased with their results, but still not completely satisfied, since they couldn’t figure out what the smallest possible squaring square (smallest in the number of squares) was. This question was left unanswered for thirty-eight more years until the 1970s, when A. J. W. Duijvestijn used a computer to find the smallest possible simple perfect squared square. This squared square, size 112×112, was made out of twenty-one smaller squares (see figure below). 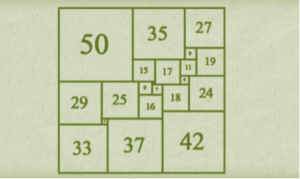 Right now you might be thinking, “Finally, they were done solving this annoying squaring the square problem”. But, you are wrong…there is still a very mysterious problem left open. Just look at the formula below:

In other words, there should be a squared square of size 70×70 consisting of the smaller squares with sizes 1×1, 2×2, 3×3, … , 24×24. Unfortunately, it looks like this squared square cannot be created geometrically. Can you create it?