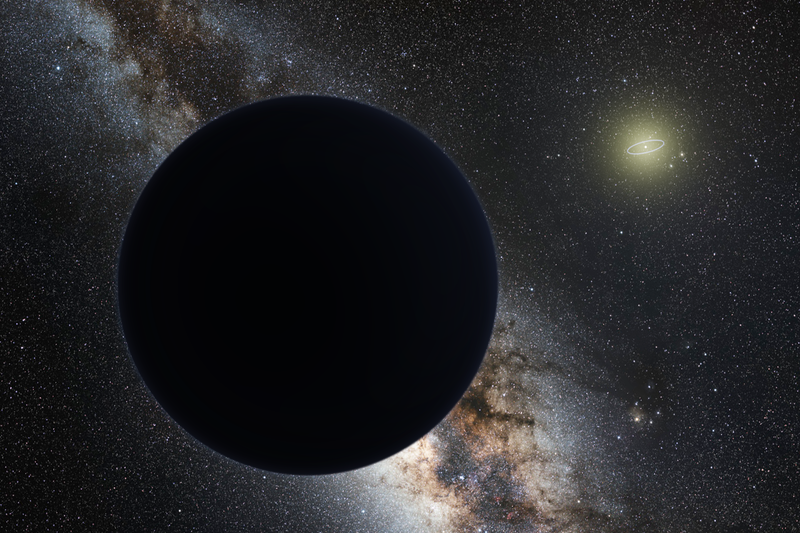 On August 24, 2006, a large group of Pluto-fans was shocked when the International Astronomical Union (IAU) demoted Pluto from a full planet to a dwarf planet. Our nine-planet solar system suddenly became an eight-planet solar system and planetary mnemonics changed from “My Very Enthusiastic Mother Just Served Us Nine Pizzas” to “My Very Enthusiastic Mother Just Served Us Noodles”. But in early 2016 Konstantin Batygin and Michael E. Brown published a paper that would cheer up all astronomers out there still rooting for Pluto. Their paper titled “Evidence for a distant giant planet in the solar system” suggests there might be mathematical evidence for the existence of a distant “Planet 9”.  Even though this planet has not been discovered yet, it’s existence would explain the unusual orbital paths of other distant objects.

Our solar system is built up out of our star, the Sun, and everything bound to it by gravity. Near the Sun, we find the four terrestrial planets, Mercury, Venus, Earth, and Mars. They are small planets with solid and rocky surfaces that can withstand the heat of the Sun. A bit further from the Sun, we find planets made out of gas, the giants Jupiter and Saturn and ice giants Uranus and Neptune, all pulled together by gravity. Beyond these eight planets, we find what we call the Kuiper Belt, a sort of donut-shaped belt outside the orbit of Neptune, filled with orbiting icy objects. One, for example, is our favorite dwarf planet, Pluto. The Kuiper Belt is in one of the most distant parts of our solar system and the objects that inhabit this region are usually referred to as Kuiper Belt objects (KBO’s). One KBO that first sparked the idea of Planet 9 is called Sedna, first spotted in 2003. Sedna’s aphelion, its furthest distance from the Sun, is over 900 Astronomical Units (AU). (One AU is the average distance between the Earth and the Sun). This is approximately 132 billion km!. But if these KBOs are already so far away, how do they suggest the existence of a Planet 9? 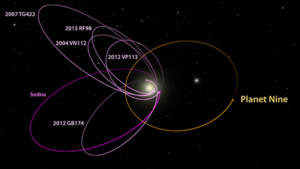 All objects in the solar system are governed by the gravitational pull of other objects. That is why the earth orbits around the Sun, and the moon orbits around the earth. And while most KBOs are being what they call “shepherded” by Neptune (their orbits show the gravitational pull of Neptune on their path), a significant number of extremely distant KBO’s – like Sedna – don’t.  Their orbits are shaped in such a way that would indicate the presence of another planet. Hence Sedna is one of a group we call extreme KBOs, an unusual cluster of objects. More and more of these extreme KBOs were discovered over the years. In early ‘19, the object FarFarOut (named after his predecessor FarOut) was discovered and became the furthest object yet detected in our Solar System.

Batygin and Brown began their research by investigating the orbits of KBOs with a certain perihelion, an object’s closest distance to the Sun denoted by

, and a certain semimajor axis, the largest axis of an ellipse-shaped orbit denoted by

Based on previous work from Trujillo and Sheppard (2014), they looked at KBOs with

AU. KBOs whose orbits qualified for these two conditions were not affected by Neptune and suggested the presence of another object. However, after some investigation, they realized that objects with

can still be destabilized by Neptune’s gravitational pull. As a consequence, they looked at how all members of the clustered objects would evolve over the next four billion years and found that only six out of thirteen of these extreme KBOs were unaffected by Neptune and hence stable. When Batygin and Brown looked at the way the orbits of these six stable objects where tilted in comparison with the ecliptic (the path of the Sun’s motion on the celestial sphere as seen from Earth), they saw that both the argument of perihelion

and the longitude of the ascending node

clustered around the same degrees. 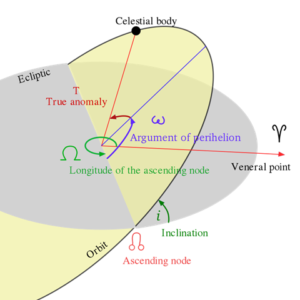 These findings imply the existence of an unknown planet since gravitational tugs from the giant planets should have randomized these parameters during the entire life span of existence. However, now, they do not look random, it looks like there is some other gravitational force shepherding them. Using a test-statistic, Batygin and Brown found that the chance of these objects being clustered in exactly this way is 0.007% (later revised to 0.2%). Hence the idea of Planet 9 came into existence, a planet with a mass about ten times that of Earth and an orbit about twenty times farther from the Sun than Neptune.

Not all astronomers are convinced. Some claim the unusual way the orbits of these extreme KBOs cluster is not caused by a ninth planet, but by a large clump of icy objects. Others believe the research done by Batygin and Brown is biased. When you spend more time looking at locations where you expect you’ll find clustered objects, you’ll probably find clustered objects, but you’ll probably find a lot of other objects too. This does not necessarily mean your findings are unusual, it is what we call a detection bias. But luckily there are still some astronomers out there using the world’s most powerful telescopes to search for Planet 9. And this method for inferring the existence of a planet by its gravitational effect on other objects has been successful in the past when it led to the discovery of Neptune. Hence who knows, our eight-planet solar system might turn out to be a nine-planet solar system after all. And even though an object that far away from the Sun will be very faint and hard to detect, some astronomers are sure that with the current rate of developments of modern telescopes, Planet 9 will soon run out of places to hide. 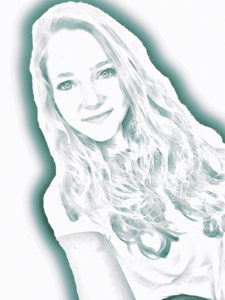