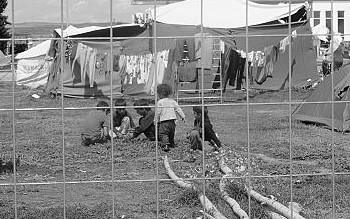 I spent my summer this year doing a humanitarian aid mission in Northern Greece, helping refugees that fled war and terror in their respective countries and have arrived to Greece by boat. Since May 2016, all borders have been closed by neighbouring countries and it looks like these people will not be able to continue further North. So they are facing a dilemma: do I stay in Greece with the standard of living gradually declining, do I try to get smuggled over the border risking my life, my asylum possibilities and all my belongings or do I return to my country and face the terror that I have fled from initially?

To start doing my part in increasing awareness concerning the refugee crisis I would like to share some of the experiences I’ve had while in Greece, working in the Syrian refugee camps. Although I travelled quite a bit here and there, I must say that the culture shock I got arriving in a refugee camp is overwhelming. The world I encountered was radically different from what I had read in newspapers.

I was immensely surprised about the living standards that people had to endure in a European country, while regulated by this country’s military and while receiving large financial aid from Europe. However, the way that the Greek military runs these camps is by just keeping people physically alive. Refugees are supplied with a bare tent, which floods with every drop of rain, a phone call to an ambulance if there’s a medical emergency and bread, pasta or potatoes for food. That’s it. People are suffering. They fled from war for the past years and have no idea when or even if they will be allowed to re-enter society. They are frustrated and hopeless. Most have physical injuries, varying from  bullets that are still in their bodies to broken bones from collapsing buildings by bombings or any other injury that resulted from accidents during the long way from Syria to Greece. On top of this, people get sick from the appalling food they receive from the military, they are running out of money, boredom is a plague and there is no sign of change with the colder winter months slowly approaching. 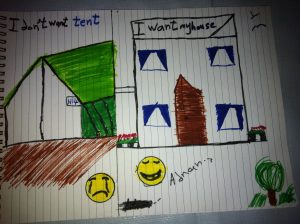 A drawing by one of the boys in the camp, Adnan. He fled from Syria with his family more than a year ago. He stayed in Idomeni for seven month until it got closed and then moved to Iliadis camp. He learnt English in this voyage and he is a handsome and bright young man.

Faced by all this frustration and suffering, we as volunteers do our absolute best to help, but we are always short on everything and there are so many factors slowing us down. Take for example the slow bureaucracy of the government and of the big NGOs. Take for example the middle of Kalochori camp, where there is a big hole of liquid waste coming from the showers and toilets, which are not being drained. The military and UNHCR agreed in the beginning of June to drain it and cover it but nothing came from it. The residents and many volunteers have begged the camp administration for weeks to at least let us, at our own cost, build some kind of bridge to protect the camp; kids can drown in a two meter deep hole full of waste water. Finally, beginning of August, thus two months later, we received permission to do something and within a day we bridged the hole. A week later the military commander, working with UNHCR, told us to break the bridge because UNHCR was supposed to solve this problem. The hole was opened once again and nothing has been done since. Another two days later a small kid fell in and swallowed some of the water. He had not yet returned from the hospital when I left Greece.

Another example of a factor that slows the volunteers down of doing their work is the presence of some opportunistic refugees who try to exploit their companions. Some spent their last money on drugs, which they give out freely in camp to get people hooked, so that they can manipulate and control them. Heroin, cocaine, they are common and the people are desperate. Some other people try to set up monopoly businesses to get the last possessions and money of people who already lost so much. These opportunists try to drive out the volunteers, because all the first necessity articles we distribute for free could be sold by them at unreasonable prices. There is a camp where practically no NGOs dare enter anymore. One day we made a door with a lock for a storage container so that we could keep some stuff at camp, such as tools and items we wanted to distribute over the next days. That same evening, we found the container door forced open. Nothing was stolen but two persons defecated in there, just to discourage us from doing our work.

But this is not about us, it is about the refugees who suffer under these conditions. Those that get sucked up by the drug dealers are pushed into prostitution when they cannot pay anymore, forced to do anything the dealers want. If you try to fight the drug dealers, you are ambushed. One night at camp it happened to my friend Rashid: attacked by a group of people, kicking him while he was on the ground. People joined the conflict and a knife got into the fight, there was blood, children crying, hysteric women trying to help their kids and men not being able to control their pent-up
rage. I spent the night at the hospital with a 21-year-old boy, Joano, my age, who was stabbed severely in his arm and was bleeding all over from other assaults. Once people do not have a reason to live anymore, they are uncontrollable.

We renovated an old, donated building in the village of Kalochori to cook healthy, nutritious meals. We unfortunately do not have the capacity to prepare 3 meals per day for the whole camp and can only distribute one meal per day. So people still need to rely on the poor military food for their daily calorie needs. Another day of finding maggots in the military food pushed some men over the edge and they forced the whole camp into a food strike to demand better food. Blocking pregnant women and children from reaching the military food. When we arrived with chicken, rice, vegetables, fresh lemon and parsley they offered us a choice: either to turn back or they would take our food and throw it on the ground in front of everyone who did not eat for a full day. There were more than 30 men threatening us, but on the other side there were dozens of children and mothers crying, begging, for food. When trying to help them we were pushed or hit to preclude us to access the food. After hours of discussion in collaboration with the police, we finally convinced the men to let us distribute the food. It is the inhuman circumstances they are forced to live in that push these men so far. One of the leaders of the strike was someone I actually became good friends with when I arrived at the refugee camp. His name is Firaz, a father of four who had helped us every step of the way before.

During these weeks in Greece I’ve heard of more Syrians who are trying to go back to Syria than of ones that made it to the rest of Europe. They prefer a country with bombings every single day over waiting in the conditions in Greece. People have moved back to Aleppo, which is the epicenter where Assad’s troops, Isis and rebels come together. Not to speak about the regular bombings of Russia and The United States in the region. This is how desperate they are and how badly they need help.

Even though volunteering is sometimes exhausting, discouraging, unbearable or frustrating, the refugees reciprocated all efforts we have done. They are so thankful for all the work we do and that we are there to hear them when so many have turned the other way. Every day you are invited to some people’s home (tent) for a cup of tea, they offer you the small quantities of food they receive, ask if you want their last cigarette and you can always count on many helping hands in the projects you’re doing at camp. Injured men helped us build floors for the leaking tents. A foreman in Syria, Hussain, had a broken shoulder from a collapsed building and was hitting nails in the wood at immense speed. Rashid and Amar, who were artists in Syria, started volunteering as carpenters to make furniture for the kitchen and closets for the school. Rasheed, who has a master degree in theoretical mathematics, comes from his camp to Kalochori every single day to help us with translations and to teach small kids mathematics. Ali, a 13-year-old kid, helped me every single evening to cook tea for the whole camp in exchange that I would play football with him for 15 minutes. Lazgin confronted his own neighbours and family who had taken some of our wood and got it back to us to build the next person’s floor. Fatima, Mimi and Sisi are girls that learned English in Idomeni (now the age to start secondary school) and helped us to solve conflicts between adults, do tent-to-tent distribution and organize events for the other girls in the camp. My friend Nor works 12 hours every day cooking for the whole camp and takes his portion last if supplies permit. After feeding the camp, we used to go and distribute the rest of the food to the refugees in the streets of Thessaloniki, some of whom not remembering when they last had eaten a warm meal. Kurdish men were distributing food to Arabs, to Pakistanis, to anyone who wanted it, while Arabs and Kurds have been in a violent, blood shedding conflict in Syria for years.  Most of these people have made me laugh, some have made me cry, but all have made an impression on me that I will never forget.

The past weeks, new emergencies have arisen in the few weeks upon the time of writing. Since the Greek ministry does not have an appropriate place where these refugees can go for the winter months, they will have to stay in this camp for at least three more months. Two weeks ago, the school flooded for the first time and the outside tents have become extremely cold at night. In the meantime, 12 babies were born in the past month and they’re going through 96 diapers per day. Similar emergencies keep on arising, while the amount of support continues to decline. 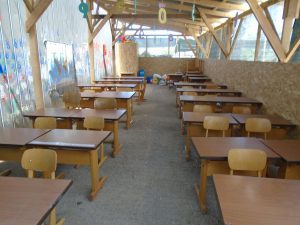 The school before and after the rains during the beginning of September. 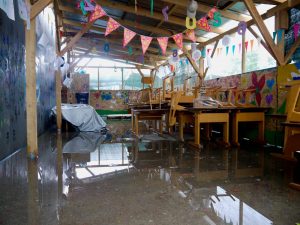 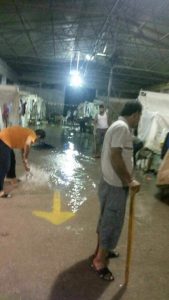 One of the many camps that was flooded resulting from the first rains in the Greek fall.

Receiving these updates on an almost daily basis have made it impossible for me to let go back home in Groningen and I feel the need to reach out to them again and give my support. I started a non-profit organization, Human Aid in Greece, which will attempt to support all the impactful projects we have going in the camp. Please take a look at www.humanaidgreece.org to see all the causes we are supporting. And if you can, please consider making a donation at www.humanaidgreece.org/donate. Each euro will be spent directly on help for the camp. I will return to Greece in December to assure that we are supporting the right projects and to roll up my sleeves again. I cannot stress any further more how much these people need and deserve everyone’s help.