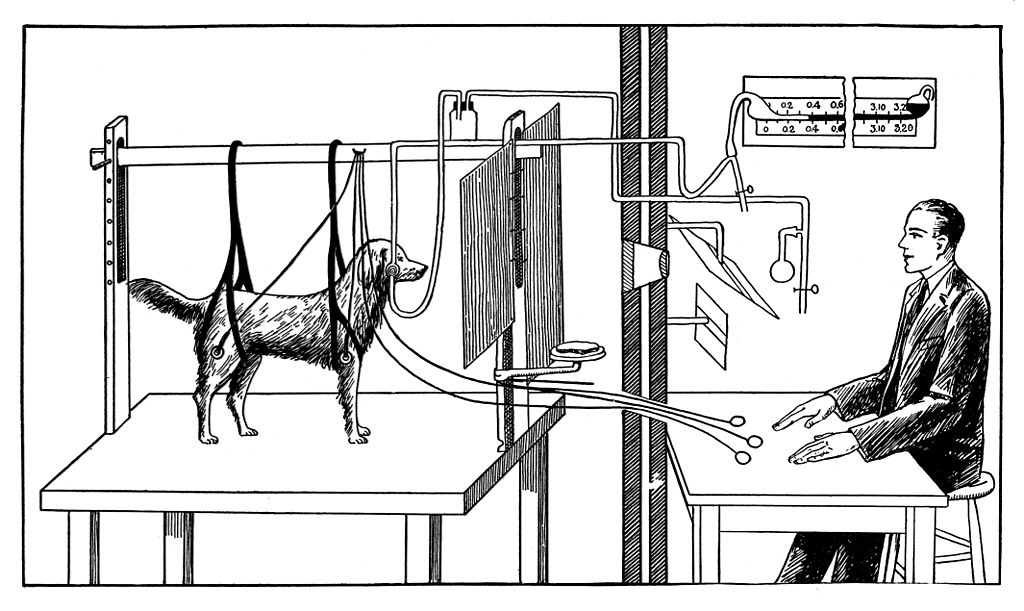 The study of behavior and mental processes of non-human animals, called comparative psychology, goes back centuries. One of the first works was written in the ninth century by the Afro-Arab scholar al-Jahiz, who published work on the social organization of ants and on animal communication. In the eleventh century, Arab writer Ibn al-Haytham did research on the effect of music on animal behavior, for example how a camel’s pace was influenced by the rhythm of a certain melody. Where these researches merely observed animal behavior, scientists over time gained more and more interest in the way that animal behavior could be permanently influenced by humans. When animals change their behavior as a reaction to external effects, can that be interpreted as animals learning from previous situations? Or is it not possible for non-human animals to learn in a way for which thinking is necessary?

René Descartes, the seventeenth century philosopher and scientist, believed that although animals are living creatures, they cannot think, do not feel pain and hence cannot learn. He saw animals as automata: mechanical robots. Descartes’ reasoning behind the disability of animals to think is that, in his opinion, animals cannot make use of language and that their suggested expressions of intelligence are pure instinctive behavior. Furthermore, and this might be his most remarkable argument, Descartes claims that when one is sure that a particular animal is able to think, he must be sure that all animals are able to think. In his own words, this is “because there is no reason to believe it of some animal, without believing it of all. And many of them such as oysters and sponges are too imperfect for this to be credible Kenny, Anthony, trans., Descartes: Philosophical Letters (London: Oxford University Press, 1970), p. 208 .” From these words it can be concluded that from Descartes’ point of view, all animals are the same in terms of potential intelligence, and that none of them possess any kind of intelligence.

In 1894, over two centuries after Descartes died, Lloyd Morgan published his book Introduction to Comparative Psychology. In this work, he stated a canon which is quite possible the most quoted statement in the history of comparative psychology. The so-called Morgan’s Canon states that “in no case an animal activity is to be interpreted in terms of higher psychological processes if it can be fairly interpreted in terms of processes which stand lower in the scale of psychological evolution and development”. This means that Morgan believed that an anthropomorphic approach to animal behavior was incorrect and that animal behavior should be explained in the simplest manner possible. Morgan’s Canon was a reaction to the work of George Romanes, who passed away the same year Morgan published his book. Romanes had an anthropomorphic approach and described animal behavior by means of higher mental processes such as self-consciousness, the ability of rational thinking and insightful acting. Morgan, however, wanted to show that the behavior of animals in Romanes’ experiments could be explained as simple trial-and-error learning. This type of learning was, in Morgan’s opinion, just a form of instinctive behavior. Hence, he thought that no higher mental processes could be addressed to these animals.

Although the opinions on the grounds and causes of animal behavior differed widely, scientists started to experiment with the adaptability of animal behavior. For example, the Russian psychologist Ivan Pavlov experimented with the reflexes of animals. His famous experiment on ‘Pavlov’s dog’ showed that certain reflexes can be triggered by connecting those to other, biologically instinctive, stimuli. Pavlov found that his dog already started salivating when it saw the man who normally fed the dog. This inspired Pavlov to examine this anticipatory salivation, which he called “psychic secretion”. He isolated his dog and presented food as a stimulus for the dog, together with the neutral stimulus of a ringing bell. After some repetitions, the dog reacted on the neutral stimulus without the presence of food: it started salivating when the bell started ringing because the dog associated this stimulus with the presence of food. This kind of conditioning of a reflex is called classical conditioning. Another form of conditioning is operant conditioning, of which the research on trial-and-error learning of Romanes is an example. Whereas classical conditioning focusses on possible influences on the reflexive behavior of animals, operant conditioning examines the changes in behavior when this behavior has consequences.

As the ‘father of operant conditioning’, B. F. Skinner was of major influence in this research field. His most famous experiment is his operant conditioning chamber, or so-called Skinner Box. Such a chamber contains lights, a loudspeaker, a response button and some reward and punishment mechanism. The reward mechanism can be a food dispenser, an example of a punishment is an electrical grid. An experiment with a Skinner Box could be that whenever a green light is shown and the animal in the box pushes the response button, he receives some food. In case there is a red light shown and the animal pushes the button, a punishment in the form of an electrical shock is given. After some time, the question rises whether the animal has ‘learned’ from the events, so whether it pushes the button when there is a green light and refrains from this in case of a red light.

It can be shown that experiments as those with the Skinner Box have effect on animals’ behavior. However, the question remains whether this effect can really be seen as proof that animals are intelligent. As Morgan already reacted on Romanes’ research, most of the results of experiments on operant conditioning can also be explained by means of trial-and-error learning of the animals. This kind of learning does not require any kind of higher mental processes except remembering the effect of a certain action. In modern times, experiments on animal intelligence and animal cognition are getting more complex, and they focus merely on processes such as self-consciousness, rational thinking, problem solving and emotional intelligence.

Pigeons, for example, are shown to possess the ability to distinguish two different items from two similar items. In the experiment, a picture of two similar items is shown to a pigeon, and a picture of two different items. Although it might be a simple thing for human beings to distinguish these two kinds of pictures from each other, it is a kind of abstract thinking that is not often shown by animals. Other experiments have shown that elephants are emotionally intelligent in the way that they feel empathy for their species An experiment at the University of Sussex in Brighton, England, examined the reaction of elephants when different types of skulls were shown to them. It turned out that when an elephant sees an elephant skull, it spends on average twice as long looking at the skull compared to when a buffalo skull or rhino skull is shown. Furthermore, ivory sticks were investigated by elephants almost six times longer than sticks of wood of the same size. and are able to console each other.

What we see as pioneering experiments in the research on animal cognition tells us a lot about our own view on the definition of intelligence. For example, it is shown that octopuses are smart in various ways: they are curious about their surroundings, can escape from an  aquarium  and can recognize individuals, no matter what clothes they are wearing. These findings are remarkable and show that octopuses are smart animals, but is that enough for us to call them intelligent? In these studies, the possible consciousness of octopuses is not shown. If this missing proof of consciousness is the reason that we see octopuses as only smart and not intelligent, does that mean that consciousness is a requirement for intelligence?

Furthermore, the question remains how we humans interpret the results of such experiments. Is it only funny and remarkable to us, or will we ever be able to accept that humans may not be the only animals on earth with higher mental processes and capabilities? Descartes thought it was evident that sponges and oysters do not think since they are “too imperfect”. If this imperfection is caused by the difference in physical appearance between humans and those animals, it would mean that octopuses evidently do not think either. However, the aforementioned studies on octopuses’ behavior seem to show the opposite. If just the difference in physical appearance makes it unbelievable for us that animals such as octopuses can be intelligent, is that not merely a sign of human arrogance? Chimpanzees are more likely to be seen as intelligent since they share about 98 percent of our genetics. Octopuses however, seem so different from humans that it is seen as incredible that they share forms of intelligence with us.