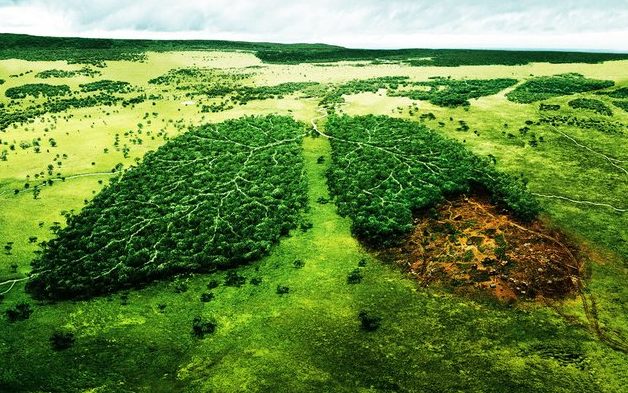 Deforestation is one of nature’s biggest problems. According to current satellite data, tropical forests are being destroyed at a rate of 8,8 million hectares per year, about twice the size of the Netherlands. Unlike a certain mr. Gump, these forests can’t run anywhere. However, a new technology developed by WWF might be able to predict when and where forests will be cut, and therefore intervene before it is too late. This article describes this potential breakthrough against deforestation.

Illegal deforestation is defined as cutting, transporting, adapting, buying or selling wood without authority of national legislation. How bad is the situation? Well, let’s explain that using facts and numbers. Despite their immense value, since the 1960s, nearly half of the world’s rainforests have been lost. Every minute 27 football fields’ worth of trees around the world are destroyed due to deforestation. The dubious title of having the highest deforestation rate goes to Indonesia, closely followed by Brazil. Very recently, the INPE (Brazilian National Institute of Space Research) rang the alarm bells because of a major increase in the rate of Amazon deforestation in between June and July 2019, compared to the same months last year. This lead to the head of this research institute being sacked by the Brazilian president, but more about this later. 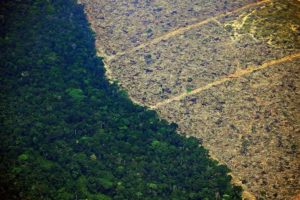 Forests are (usually) not being destroyed by the cause of hating the environment. Most of the deforestation is a result of the need for space that can be used as farmland. A direct cause of this is the rapidly growing number of people in the world, increasing the global demand for food. In South East Asia, for example, lots of forests are being burned down in order to make room for more palm oil plantations. In fact, unsustainable agricultural expansion is the direct driver for around 80% of deforestation worldwide. Other prominent drivers are mining, infrastructure and urban expansion.

Next to the need of making room for farmland, roads, or cities, cutting trees itself is a lucrative business. For lots of people living in rural areas, selling and transporting trees is responsible for their main income.

So why is this bad? Well, for a number of reasons. Most importantly, forests play a critical role in mitigating climate change because they act as a carbon sink – soaking up carbon dioxide that would otherwise by free in the atmosphere and contribute to ongoing changes in climate patterns. This means that when forests are cleared, they emit carbon dioxide. 11% of global greenhouse gas emissions caused by humans can be blamed on deforestation – equivalent to the emissions from all the cars and trucks on earth.

The last main group threatened by deforestation consists of the animals. 80% of the world’s land-based species, such as elephants and rhinos, live in forests. Due to destroying their territories, some of them are already extinct and many of them, such as the orangutan, Sumatran tiger and many species of birds, are endangered. 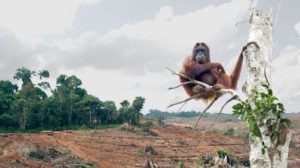 So how is deforestation dealt with at the moment? Well, first of all, by trying to take away the reasons for people to burn or cut down trees. Smarter ways of agriculture mean that less farmland is needed for the growing world population. Although solutions in this field continue to improve in efficiency, they often do not directly prevent tribes in Brazil or Indonesia from cutting down trees.

Therefore, global and local organizations work together with governments, local communities and other stakeholders to combat illegal logging. In the last decades, systems using satellite images have become quite accurate at depicting where forest has been illegally cut. The problem with this, of course, is that then the damage has already been done. Could this be done in a smarter way?

Forest experts of WWF-Nederland Jorn Dallinga and Hans Beukeboom might have come with the solution of this problem. Together they have developed something they call an Early Warning system: a series of computer models that predicts where a chainsaw will cut down a significant amount of trees between now and anytime soon. They constructed two deforestation predictors: one that shows what you can expect within the upcoming four weeks, and one that looks ahead for a period of six months. The latter is currently tested in Central-Kalimantan in Indonesia. Here the system turns out to work quite well, as it is correct eight out of ten times. The great thing is: the predictor will get smarter and smarter, as it uses a self-learning algorithm.

How does this new system work?

What the Early warning system essentially does, is putting together different pieces of information. Experiences from the past are used as a regressor, but also telephone data and satellite images. A new road is being built in the middle of the forest? Then people who will start living there will look for a source of income, which might be illegally chopping lots of wood. Are some machines in a palm oil factory unused? Then there’s room for more supply, often created by chopping down trees. Is the price of wood suddenly increasing? That means there’s a shortage of it, and probably people will respond to that by cutting down some trees.

After the Early Warning system has predicted the danger areas for deforestation, local authorities can work together to make sure that the forests stay unharmed. This can be done by fining illegal wood cutters, and also by providing or pointing out different potential sources of income.

The system using big data has proven to be a success so far, as the first analyses show that that illegal deforestation on Sumatra and Borneo has diminished by more than 30%. Because of this success, WWF has stated the intention to use the system on large forests all over the world.

As we see, the first results of the Early Warning System are very promising. However, this does not mean that deforestation rates will automatically reduce again. In this article, the main focus has been on the illegal cutting of trees. Fighting this can only happen effectively if a nation’s government actively wants to cooperate with this. However, some countries are taking the problem of deforestation and the accessory climate change more serious than others. As mentioned before, In Brazil president Jair Bolsonaro fired the head of the research on deforestation, accusing him of inaccurately presenting data and even manipulating it. After being asked whether he planned to do anything against the high deforestation rates, the climate skeptic Bolsonaro answered: “you can’t change it, nor you can do much against the forest fires. It’s a cultural thing.”

Given the different values and beliefs of different governments that rule a country for a while, one could root for stronger global rules about how to tackle deforestation. These rules are made at Climate conferences such as the one that is held in Madrid right now. However, with so many countries with different interests, these rules are very hard to realize and even harder to control. This shows that, while the Early Warning System of WWF is definitely a step in the right direction, a lot more of these steps are needed to win the fight against deforestation.