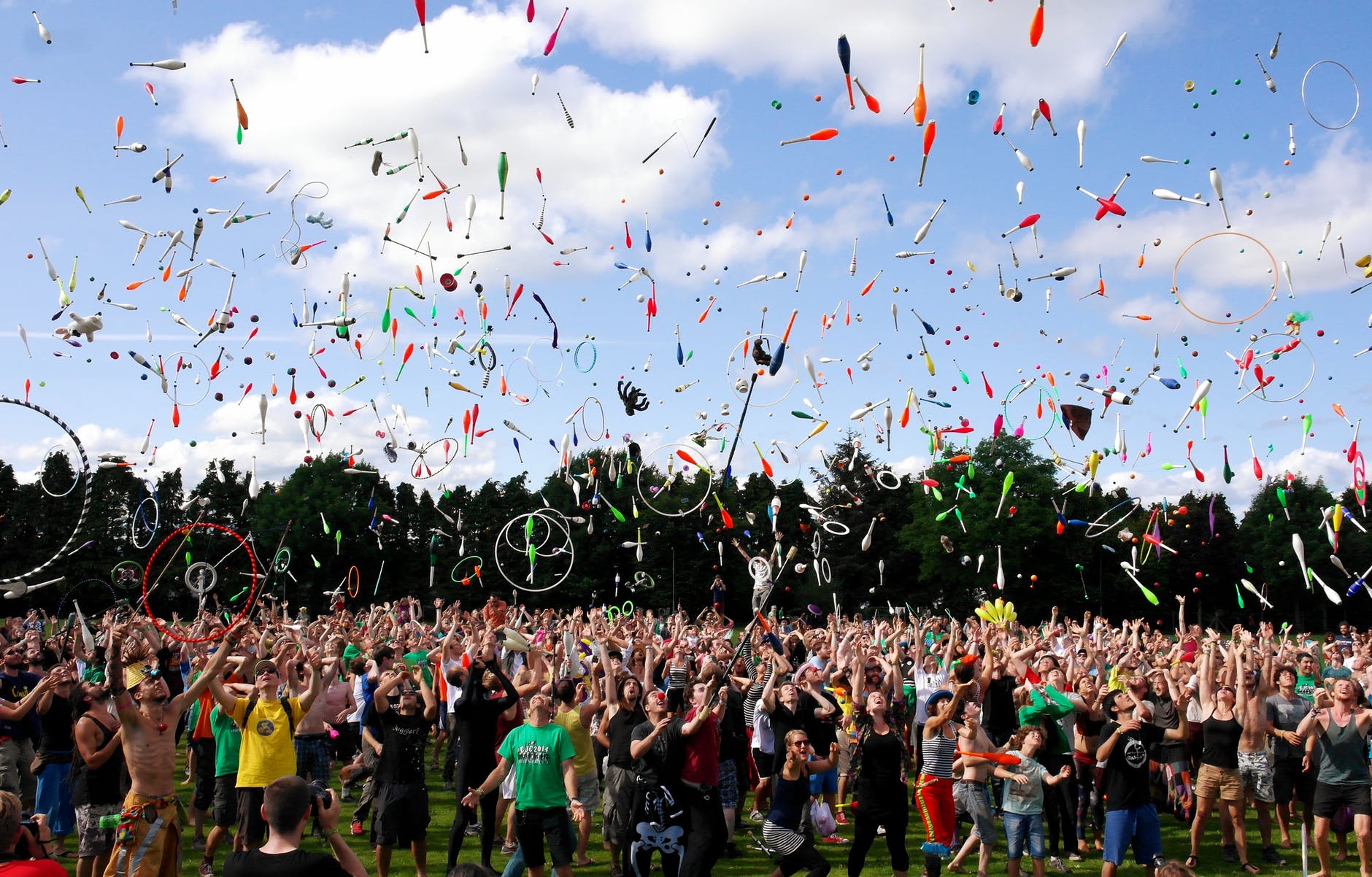 Juggling, something we have all tried at least once in our life. For some, it resulted in the great satisfaction of three balls flying in perfect harmony through the air. For others, it was a traumatic experience of balls flying everywhere except for the right place. It is a quite challenging, but rewarding hobby. Some studies have even shown that people who learn to juggle have a boost in their brain development. Learning to juggle accelerates the growth of neural connections related to memory, focus, movement, and vision. But despite what some people might think, juggling is not just throwing some balls in the air and catching them. It actually has pure and tight patterns, which involve a lot of mathematics.

Before we dive into the mathematics of juggling, let’s first understand the different throws that exist in juggling. We all know the basic throw with three balls, which is actually called the three-ball cascade. With this move, each ball is tossed by one hand to the other. The right hand tosses the balls to the left hand and vice versa. Just as the floating ball is about to fall down, another ball is tossed into the air to free the juggler’s hand and catch the falling one.

However, this is not the only way to juggle three balls. We can change the pattern and toss the three balls at three different heights. As you might imagine, there is a wide variety of patterns. All of the patterns can be described by a notation system called siteswap.

So, how does this siteswap notation work? The basic idea is to assign a nonnegative integer to each throw. This number then corresponds to the number of beats the ball takes to complete the trajectory. On every beat at most one ball gets caught and tossed again. Odd numbers (1, 3, 5, etc.) are used for throws from one hand to the other and even numbers (2, 4, 6, etc.) for throws from one hand to itself. It may happen that on certain beats no ball lands and therefore no ball gets tossed. This is expressed by the number 0, when one hand is not holding balls during a beat. This basically looks like this: 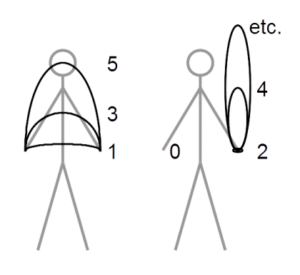 Hence, the numbers tell us the height at which the balls are tossed relatively to the execution speed of the throws. This means that you can either toss a 5 where the top height is just under our head if we juggle quickly, or over three meters if we juggle slowly. The only thing that really matters are the beats left to juggle other balls during the trajectory of the toss, which depends on the speed of the juggler. To stop worrying about starting and stopping, we assume that the juggler has been juggling forever and will never stop.

Can every sequence be juggled?

Theorem. A sequence of nonnegative integers (

) is a valid juggling siteswap if the numbers

are distinct for all

returns the remainder of the division

. With this theorem, it is easy to check if a string of digits is a valid siteswap. So, let’s check using the theorem whether the sequence 4413 is juggable.

Since 1, 2, 0, 3 are distinct numbers, the sequence 4413 is a juggling sequence. To check this, we can draw the juggling diagram of the sequence. The dots at the bottom depict the beats on a virtual timeline, the arches represent the different throws. This diagram confirms that 4413 can be juggled, since the diagram extends indefinitely to both sides and on every beat at most one ball lands and gets tossed again.

Now, let’s look at the sequence 21 and check whether it is juggable.

Since 1,1 are not distinct numbers, the sequence 21 is not a juggling sequence. Let’s check this using the juggling diagram. We can see here that a juggler would have to catch two incoming balls in one hand on every second beat. Besides that, he would have to make balls mysteriously materialize and vanish.  So, the sequence 21 can indeed not be juggled.

So, now we have met the siteswap notation and know whether or not a certain sequence is juggable. But how many balls would you need to juggle the sequence? For this we also have a theorem!

is a valid siteswap, then we have that

So let’s try this theorem for the 4413 pattern:

. Hence, we need three balls to juggle this sequence!

Using these theorems, jugglers can find new tricks and patterns just by applying mathematics! However, there are many more theorems to find for one man juggling. Besides that, there exist many generalizations to multi hand and multi person juggling. Even a whole book, The Mathematics of Juggling, by Burkard Polster, has been written about the subject. So, if you became interested in the art and mathematics of juggling, you have no reason to be disappointed.

This article is based on ‘The Mathematics of Juggling’ by Burkard Polster.