Won’t you stay with me. The words of this 2015 hit single were directed to a beloved one-night-stand. However, soon they involuntarily got a different meaning for writer Sam Smith, begging the money he earned with the song to stay with him. Without much success, as 25% of the songwriting royalties were given to Tom Petty and Jeff Lynne. The reason for this? Plagiarism. Stay with me sounded exactly like Petty’s 1989 hit I won’t back down.

This wasn’t exactly the only time this has happened. Songs such as Dani California by the Red Hot Chilli Peppers, Viva la Vida by Coldplay, the Ghostbuster Theme, or Roar by Katy Perry have all been accused of plagiarism, followed by lawsuits with various outcomes. One of the first famous cases of alleged music plagiarism is the 1979 lead single My sweet lord by George Harrison, former lead guitarist of the Beatles. It was suggested that he had taken the melody from girl group The Chiffon’s He’s So Fine.

Assuming George Harrison and Sam Smith, as they have claimed, indeed had never deliberately taken their melody from the songs of their predecessors, it is judged that it is still quite likely that they have subconsciously taken melodies from these previous songs. Therefore, the argument goes, they are guilty of plagiarism. Lawsuits of this kind have rapidly increased in number and in claim sizes. As a result, artists nowadays live in constant fear that their next song is similar to a song that has already been written, somewhere and at some time.

One disc, all the melodies in the world

Damien Riehl, a musician and lawyer, wants to prevent this fear and stop these money-grabbing litigations. Together with software developer Noah Rubin he figured the following: if we can make sure that literally every possible melody is a guaranteed copy of something that already has been made, then every song that will ever be made is plagiarism. So that is what they did. They wrote an algorithm to produce all possible melodies and put it on a hard drive disc. As a result, according to current copyrights laws, all songs that will ever be made are plagiarized from this hard drive. This isn’t a scheme to sue people, though. Quite the opposite, in fact. They hope that their action will lead to change the way lawsuits of songs that sound similar are currently being treated.

So how did they develop their disc? Unlike other forms of art, such as painting, where you can make an infinite amount of different brush strokes, or poems where you can use an infinite amount of words, the number of possible melodies in a song is actually remarkably finite. If you go continuously upwards on the piano starting from the note C, as an example, the thirteenth note is again a C. The duo of the lower and higher C is called an octave. Using this limited number of possibilities, you can code all possible melodies in the same way hacking software trace passwords: start from aaaa, if wrong go to aaab, if wrong go aaac, and on and on. Exchange the numbers for the possible notes in a scale and you can get any melody you like. 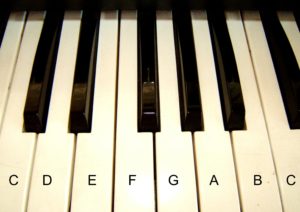 To a computer, notes are just inputted as numbers. The legendary Dutch song Mieke heeft een lammetje transforms into 3212333 222 333 3212333122321 (people who ever played this on the piano will immediately recognize this pattern). Why does this help musicians? Well, the interesting thing is that under copyright laws, numbers are just facts, and facts have thin copyrights laws or even no laws at all. Therefore, Riehl and Rubin suggest that melodies shouldn’t be copyrightable. On the website http://allthemusic.info, they have made all the melodies and the code that wrote their algorithm public. Note that they are only taking into account melodies, not lyrics or specific recordings.

So how did they construct their algorithm? Well, considering that almost all lawsuits happen in pop music, since it is the industry in which the most money is made, they restrict the possibilities to one octave of the piano. This is sufficient as almost all melodies in pop music take place within an octave. Taking into account what musicologists define as a melody, they landed on a maximum number of possible notes of 12. If this sounds like a small number of notes to you, I dare you now to try to think of a theme of a song consisting of more than 12 notes. Quite hard, right?

On top of this, the number of combinations of chords underlying these melodies that are used in 99% of all songs is actually quite small. This is due to the fact that we perceive certain chord progressions as ‘nice’ and others as ‘bad’ (free tip: within 15 minutes, learn how to play the chords C-G-Am-F on the piano and you can pretty much play 90% of the pop songs that are on the radio nowadays). This intuition of what sounds good and what sounds bad actually quite differs between western music and some other forms of music, but that is a topic for another time.

Summing everything up, lawsuits following plagiarism accusations can have disastrous consequences for artists. George Harrison, after having to pay $1.5 million because of his lawsuit, even pulled back on writing music for a while. In an interview with The Rolling Stone, he said: ‘after the trial it was hard to start writing again, since every song I was listening to, sounded like something else.’  Due to the rapid increasing supply of music on domains such as Spotify, Youtube and Soundcloud, the number of unused melodies is vastly shrinking. With their initiative, by producing all possible melodies and putting them into the public domain, Riehl and Rubin have made an important step to provide musicians more freedom and less fear of stepping on a musical landmine. As Riehl concluded in his TedTalk: ‘we have made all the music to be able to allow future songwriters to make all of their music.’

With that said, I would like to end this article with this poem that I have blatantly plagiarized from the comment section of the TED Talk:

As it’s all ultimately been cloned

Because every melody and beat

Is most likely a medley of repeat!

That makes me wonder

What dimension did Mozart’s art start?

Did they beat with an ear?  Or hear, with their heart?